Cold War Kids are currently working up material for their third album and at an intimate gig on Saturday outside Los Angeles, the indie-rock quartet previewed new material from the record, which came on less like an evolution and more like a revolution. Throughout the band’s blistering 80-minute set, the Kids tore through eight new songs that revealed a bigger, bolder take on their skeletal garage-y blues.

Before a packed audience at the roadhouse venue Pappy & Harriet’s Pioneertown Palace, Cold War Kids launched immediately into new tracks “Royal Blue” and “Finally Begin,” which featured Willet’s high, forlorn wail and guitarist John Russell’s scratchy guitar riffage. While those tunes stayed true to the singer Nathan Willet’s penchant for writing sharp, Southern gothic narratives, new tracks like “Mine Is Yours” had a personal, biographical vibe and found Willet getting up-close with fans in the front row. “I’m a shy person,” he acknowledged at one point, seated at the piano that faced directly into the faces of railbirds, “so I’m trying to connect with you here.” (Of course, considering the setting, it was no mean feat to bond with the audience: Pappy & Harriet’s is the sort of rustic roadhouse that serves drinks in Mason jars and decorates the walls with beat-up license plates.)

While Cold War Kids’ set focused on new songs, the band — Willett, Russell, bassist Matt Maust, and drummer Matt Aveiro — mixed in tunes from their debut Robbers & Cowards and 2008’s Loyalty to Loyalty, along with cuts from their 2009 EP Behave Yourself.

But the new songs were the highlight of the night. “Cold Toes” was powered by a sharp, staccato guitar line, with Willett shouting lyrics like, “Cold toes on the cold floor!” The banging new single “Louder Than Ever” started modestly before building into a soaring anthem, with Nathan Warkentin (from the opening band We Barbarians) joining in as a second percussionist. 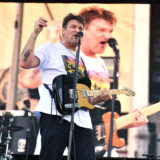 Most notable, however, was “Skip the Charades,” an anthemic plea for honesty that’s as direct as anything Cold War Kids have written. No skeletal guitar licks here — the guitars have an arena-rock ring that matches the outsized quaver in Willett’s voice when he sings “You’re seeing right through me anyway.” It’s new territory for guys who’ve channeled their emotions largely through Southern gothic storytelling on their first two albums. But on Saturday, it sounded like ground they could easily cover.

cold war kids, We Were There