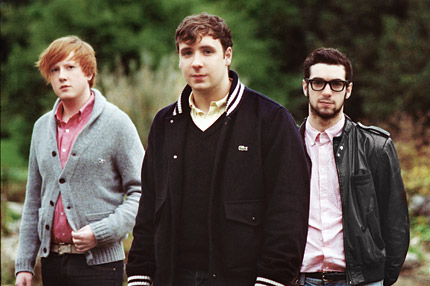 Before their set at the Glastonbury festival in June, the members of wide-eyed guitar-and-synth trio Two Door Cinema Club were summoned for an unusual meet and greet. “Prince Charles was there and apparently had asked to meet a ‘cool new band,’?” says bassist Kevin Baird with a chuckle. “The organizers decided that was us. Charles had no idea who we were, though he did give his security guards a very nervous look when he found out we were from Northern Ireland!”

Being introduced to people as strangers is sure to become an increasingly rare experience for Baird, singer-guitarist Alex Trimble, and guitarist-keyboardist Sam Halliday, all 21, who have been bandmates since overcoming some initial hallway wariness as students at the same high school in 2004. “Alex wore these baggy black jeans and a Nirvana T-shirt to school — I didn’t like the look of him,” remembers Baird, “and he probably didn’t like me because I was a jock.”

For Two Door’s biggest fans, though, the band’s most impressive achievement was one that never happened. After Kanye West posted the stylishly choppy video for History’s “I Can Talk” on his website, an Irish magazine jokingly implied that a collaboration was in the works. “I got calls from my mom and friends, saying, ‘I can’t believe you didn’t tell me about working with Kanye!’?” says Baird. “I felt bad telling them it wasn’t true.” Not yet, anyway.