Adele: New Record is ‘Quite Different’

British singer talks about the roots and country influenes of her new album 21. 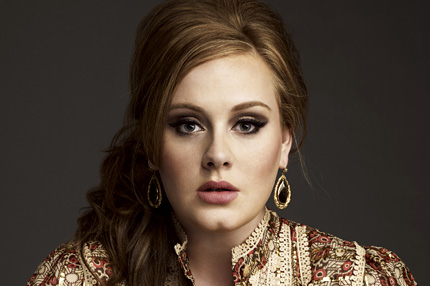 After breaking out with her 2008 Grammy-winning debut 19, British singer Adele will return with her anticipated follow-up 21 on February 22. (Although Adele recently turned 22, the album titles come from her age while recording.) And the new record finds the singer ditching her Brit-flavored R&B in favor of classic and contemporary roots and country music.

“It’s quite different from the first record,” Adele tells SPIN.com. “I got really into [country singer and one-time Elvis Presley tourmate] Wanda Jackson, and it’s sort of like I’m stronger with this record.” Cut in studios in Malibu and London, Adele worked with some of pop’s top producers and songwriters, including Rick Rubin, Paul Epworth, and OneRepublic’s Ryan Tedder.

Adele will unveil her new sound when lead single “Rolling in the Deep” hits radio on November 15. The singer describes the song as a “gospel disco” kiss-off to an unfaithful dude. “It’s me saying, ‘Get the fuck out of my house instead of me begging him to come back.”

Adele adds that the country-flavored vibe of the new record was borne out of genuine love for the genre. She was introduced to contemporary Nashville music specifically from her bus driver while on tour in the South. “He listened to all this amazing country music and we’d rock out late at night, chain smoking and listening to Rascall Flatts,” says Adele. “It was really exciting for me because I never grew up around [that music].”

As Adele preps the release of 21, revisit SPIN’s exclusive studio visit with the singer here.