It was Halloween in New Orleans, and MGMT, My Morning Jacket & many more offered tasty treats. 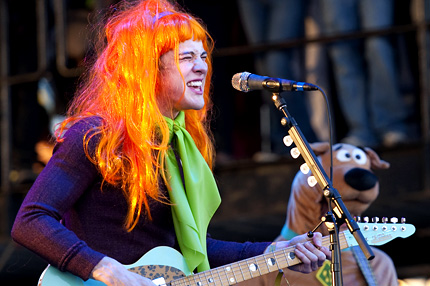 A music festival named the Voodoo Experience. Staged in New Orleans, the home of Mardi Gras. On Halloween weekend. Might folks costume? Oh, yes. Friday’s attendees included Frank, the giant scary bunny from the Jake Gyllenhaal cult classic Donnie Darko, and Jesus, complete with crown of thorns. On Sunday, Gumby grooved to MGMT and a Super Mario Brother danced in a conga line during Deadmau5.

Set on six stages set amid the lagoons and live oak trees of New Orleans’ sprawling City Park, Voodoo proudly trumpets its host city. Culinary options this year included fried alligator on a stick and char-grilled oysters. A booth advertised “BP Blows.com” T-shirts, fallout from the oil spill that soiled the Gulf Coast this spring. Three secondary stages featured mostly homegrown talent playing the indigenous music of the Big Easy, leading to interesting juxtapositions, like when Innerpartysystem peddled its industrial-ish dance music on one stage while Southwest Louisiana zydeco siren Rosie Ledet pumped an accordion and sang about Creole queens and the Saints winning the Super Bowl on another.

Amid all the costumes and fanfare, we whittled down the action to these ten most memorable moments from three days and nights of Voodoo 2010:

Best Costumes: MGMT
Halloween did not pass unnoticed by the men of MGMT. They costumed as characters from Scooby-Doo. Singer Andrew VanWyngarden sported a long orange wig and pink tights as the foxy Daphne. Keyboardist Ben Goldwasser was the brainy Velma. Guitarist James Richardson donned a full-body Scooby-Doo get-up. By comparison, bassist Matthew Asti and drummer Will Berman got off relatively easy as Shaggy and Fred, respectively. “Nobody ever thinks to ask, ‘How are you, Scooby-Doo?'” VanWyngarden observed.

Richardson addressed a fan down front wearing a striped red and white shirt and round glasses. “Hey, Waldo — maybe you should hide yourself better. Where’s Waldo? He’s right there in the front row.” VanWyngarden batted away errant locks of faux hair, but otherwise the costumes did not impede their ability to render tidy psychedelic pop. They scooted through “Electric Feel” and led a mini-dance party for “Kids.” Scooby-Doo, it turns out, is a damn good guitar player.

Best Deployment of a Flying-V Guitar: My Morning Jacket
While closing Voodoo’s main stage on Sunday, My Morning Jacket frontman Jim James announced this would be the band’s final gig before entering “hibernation mode.” Thus, they made it count with a two-hour tour de force, and James was obviously stoked to be in New Orleans on Halloween: “I feel like there’s no other place on Earth to be. Every song, my molecules get more pulled out into the ethos.” He was all over the stage, shaking his head of curls or hiding them under a towel. He and Carl Broemel bore down on a variety of axes, none more classically rock’n’roll than James’ flying-V guitar, on which he soloed throughout “I’m Amazed” and elsewhere.

New Orleans’ own Preservation Hall Jazz Band, with whom MMJ has collaborated throughout the year, leant their brassy swagger to an ominous cover of Black Sabbath’s “Black Sabbath,” and then the combined Kentucky/Louisiana ensemble swung into party mode for the stuttering Mardi Gras classic “Carnival Time.” By the song’s end, James was duck-walking across the stage, armed once again with his most excellent flying-V.

Best Feathered Headdress: Jonsi
With spectral Icelandic ensemble Sigur Ros, Jon “Jonsi” Birgisson lofts an especially ethereal falsetto. It is only slightly more earthbound on his current solo album, Go. Judging by the skin tone of Jonsi and his bandmates — it approaches the translucence of creatures who live out their existence in caves — they are not accustomed to sunlight. But they were undeterred by the bright, warm sun that greeted them at Voodoo. Even without the dramatic lighting and effects that normally inform their show, the mesmerizing, otherworldly music was undiminished.

Jonsi’s voice ascended into the stratosphere as sudden tempo shifts tore asunder chilled out washes of sound, and later a xylophone and toy piano combined to craft the soundtrack to a child’s dream. The singer wore a patchwork shirt, trimmed in red fringe, that could pass for an old quilt sewn from scraps, but in the encore, he accessorized with a towering feather headdress and launched into a head-banging war dance.

Best Lil Wayne Shout-out: Drake
Drake knows who prints his paper: The smooth Young Money star asked one of the largest crowds of the weekend whether they still loved his mentor, currently incarcerated hometown hero Lil Wayne — and the “Free Weezy” T-shirts spotted throughout the festival grounds certainly made that sentiment a winning one. Just in case Wayne needed a little boost in the slammer, Drake whipped out a flip camera and documented the audience’s love for the soon-to-be-free Wayne.

When not shilling for his boss, Drake — backed by a band boasting both a DJ and Adrian Eccleston, a hot-handed electric guitarist — kept things pretty literal: Sparklers rained down during “Fireworks,” and he personalized “Show Me a Good Time” to honor New Orleans. Later, he saluted the ladies whose hygienic diligence qualifies them as “Fancy,” assuring them that “tonight I’m single / if you want Drizzy to make your pussy tingle.”

Best Dichotomy: Florence & the Machine
Florence Welch, the British indie-pop singer that saw her 2009 debut, Lungs, take up residency at No. 1 on the U.K. charts, deftly alternated contrasting personalities and styles at Voodoo, from the docile sounds of harp to an urgent mix of guitar and drums. Dainty flowers decorated her microphone stand, but she took vigorous whacks on a lone drum sitting next to it. One moment it was elegance, as she spread her black veil like a Halloween butterfly and caressed the air, eyes closed, during the verse of “Rabbit Heart (Raise It Up),” but the next, she spat “Kiss With a Fist” with a rap cadence as she stalked the stage, barefoot. And when she asserted the chorus of her breakthrough hit, “Dog Days are Over,” you believed her.Read More About The 10 Best Moments of Voodoo 2010 On Page 2 >>

Best Foam-Sprayer: Ozzy Osbourne
The Prince of Darkness started off Saturday with a surprise appearance at the Jon Stewart/Stephen Colbert Rally to Restore Sanity And/Or Fear in Washington, D.C. He finished the day as the lone representative of hard rock’s old guard at Voodoo.

Osbourne delighted in his primary stage prop: A high-pressure hose that spewed foam. Grinning like a Cheshire cat on crack, he coated fans and photographers down front, and while the photogs likely weren’t amused by the sticky wet goo on their gear, the fans didn’t seem to mind.

Best Main Stage Evacuation: River City Extension
Hailing from the Jersey Shore, home turf of the E Street Band, River City Extension collectively understands the concept of earning an audience and taking the music to the people — literally, if necessary. With the afternoon sun bearing down, they mixed up multiple strands of roots music and such exotica as French horns and cellos in an effort to reach a small crowd largely unfamiliar with them. For the final “Bone Marrow Twist and Shout,” Jim Michelini and his bandmates climbed down from the towering stage to ground level. Sans amplification, the musicians moved among the mostly seated audience, singing loudly, strumming acoustic guitars and banjos and keeping time with congas. They would not be denied, and finally conjured a clap-along.

Best Stage Artist: Janelle Monae
The fact that some fans missed Janelle Monae due to a scheduling snafu was tragic — what a compelling performer: The future-shock space-funk fashionista morphed into a perpetual motion machine with like-minded musicians. After straying into Nina Simone territory on “Smile,” Monae and her band locked into a groove on “Take Me Back to Wonderland,” then down for the spoken-word segment of “Mushrooms and Roses” — on which she channeled her inner Picasso. On a blank white rectangle, she casually outlined in red paint what looked like the silhouette of a curvy woman’s posterior. After she added accent lines and the motto “Love 4,” the work was finished.

Best Non-Traditional Use of a Port-a-Potty: Weezer
Before “Undone — The Sweater Song,” Rivers Cuomo invoked a higher power: “I raise my humble acoustic guitar to the gods. Come rock energy, I summon thee.” His prayers were answered, and the stage could not contain modern rock’s Woody Allen. He made his way down the barricaded alley that divided the audience to the distant soundboard. He clamored atop a portable toilet and briefly sang “Pork and Beans” into the vent pipe protruding from the roof. Eventually he returned to the stage and finished off a stout greatest hits set.

Weezer confidently bashed through the likes of “Hash Pipe,” “Dope Nose,” and “Say It Ain’t So,” but an incorrect key aborted the first stab at “Hang On.” “You wanted reality TV, you got it. This is Weezer TV, with all the fuck-ups,” Cuomo said, before a more successful second attempt. “Close enough for alternative rock’n’roll.”

Not forgetting it was Halloween, he disappeared backstage and returned in a long platinum wig to warble Lady Gaga’s “Poker Face,” which they’ve been covering all year.

Best Spectacle: Muse
Muse made the rounds of major American festivals this year, and their Voodoo appearance completed the trio’s North American victory lap. Matt Bellamy and company did not arrive at headlining stadiums in their native Britain via subtlety; their first-ever New Orleans performance was devoid of it.

Sporting a wicked-cool sparkling silver jacket and matching trousers, Bellamy carved metallic shards with his guitar, soloed the national anthem — a little something for the colonies — and riffed on AC/DC’s “Back in Black.” He played guitar behind his head as giant eyeball balloons bounced over the audience, his voice evoking equal parts Thom Yorke and Jeff Buckley. Bassist Chris Wolstenholme and drummer Dominic Howard, along with auxiliary keyboardist Morgan Nicholls, wore their Queen influences openly. Club beats goosed some songs. The revolutionary lyrics of “Uprising” flashed on video screens….just so nobody missed the point.

Kevin Michael
Tags: voodoo experience 2010, We Were There