Maynard James Keenan and crew deliver an electric version of "Weak and Powerless" on Jimmy Kimmel. 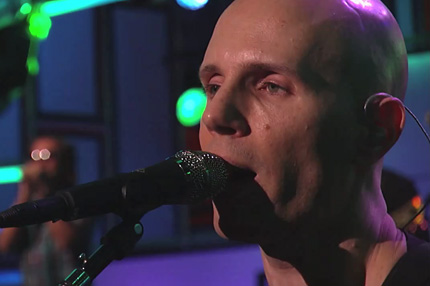 Before their first tour in six years kicks off next week in Tempe, Arizona, A Perfect Circle dropped by the Jimmy Kimmel show last night to make their first TV appearance as a reunited crew. Maynard James Keenan and Co. delivered an electric version of “Weak and Powerless,” from their 2003 album Thirteenth Step. Watch the performance below.

As SPIN previously reported, A Perfect Circle have been busy rehearsing for the 14-date trek and the band recently offered up studio footage of them prepping for the tour. Check out the band rehearsing “Magdelena” here and revisit our recent interview with Keenan here, where he lays out plans for upcoming Puscifer and Tool projects.