HInt: One of 1984's biggest movie stars appears in the violent clip for Canadian hard-rockers' "Had Enough." 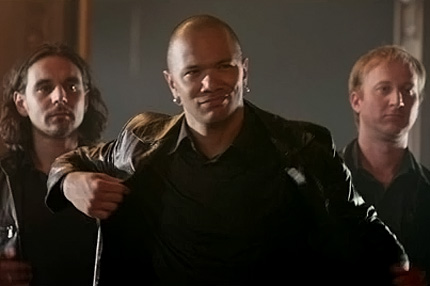 Since the late-90’s, Canada’s Danko Jones have been cranking out killer, Jack White-approved albums of pummeling, metal-tinged garage rock. But the band is finally getting their props – and with the help of some Hollywood stars.

In a video trilogy for their new album Below the Belt, Danko Jones have roped in everyone from Elijah Wood to Selma Blair to Motorhead’s Lemmy Kilmister for a noir-ish crime story that’s like a Charles Bukowski novel come to life.

Now, SPIN has the exclusive premiere of the second chapter – and the band has roped in none other than Ralph “Karate Kid” Macchio to play the role of a guy chased down by gun-toting henchmen who evades escape with the help of an army of clones. If the plotline sounds confusing, Danko Jones have helpfully tacked on subtitles like a vintage Kung-Fu movie. Quentin Tarantino would approve. Check out the clip below.

SPIN caught up with Macchio to talk about working on the project. In an email, Macchio writes, “I’m always accused of being one of the nicest guys in show biz…but that all changed when I met Danko Jones and Co. These guys are crazy respectful, so damn nice and appreciative…come on boys, you’re a rock band. I was expecting to get screamed at! Instead I got praised and lauded for doing their video. Had a blast being involved. Was just trying to be as cool as the Elijah Wood kid from the first one. Jasonand Josh Diamond [who directed the clip] allowed me to play “the bad-guy.” Always fun to play the villain. We all know where nice guys finish, Ha! Diamond Bros have visionary minds…the end result speaks to that. Great job. Who knew getting cloned would be so much fun. Now I’ll never have to age. Bwwahahaha!!!”