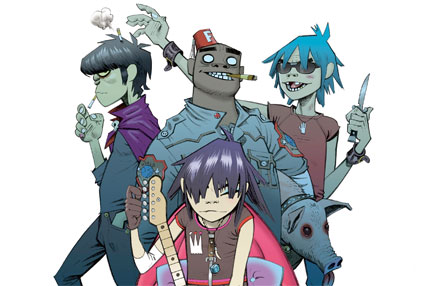 SPIN and Gorillaz teamed up for the ‘Escape the Plastic Beach’ U.S. Tour for the “Ultimate Fan Correspondent” promotion. We asked our Twitter followers to tell us why they should win the opportunity to cover the NYC Gorillaz sold-out Madison Square Garden show on October 8, 2010. Brooklyn resident Jiro Kohl was the winner.Armed with a limited edition Gorillaz Flip Cam, Jiro got a fifth row view of the concert. Watch Jiro’s footage and read his write-up of the sold-show in his own words below!

Twitter has been known to lead to destroyed careers and hefty finesfrom athletics organizations. Who knew it could lead to a fifth rowseat at MSG to see one of the most important and highest selling actsin the past 15 years? Not me, for one. But it happened, and before Iknew it, I was leaving work in Times Square to watch The Gorillaz rockMadison Square Garden for their Escape To Plastic Beach Tour, courtesyof the fine folks at Spin Magazine and dumb luck.

Once inside the home of some basketball team that sucks, I was amazedat how few sets of escalators people that buy expensive tickets haveto go up. And while wondering how it is that a 14 year old kid and hisgirlfriend could afford front row seats at The Garden, N.E.R.D.appeared on stage and performed a bunch of new songs off theirupcoming album, “Nothing”. They closed with “Lapdance”, which thecrowd ate up, but it was obvious that the people wanted to see onething: animated Brits and floating land masses on the giant projectionscreen above the stage.

They came out to monstrous applause, illuminating the stage with aglowing “Gorillaz” light display and huge screen displaying a tripthrough their wacky, animated netherworld, filled with floatingislands, meals of cables, and a 50 foot tall Snoop Dogg,gangsta-leaned out, pimp aura emanating throughout the venue. Fromthere, it was a non-stop high-energy affair, as they ran throughalmost the entirety of the new album, classic cuts like “Feel GoodInc”, and closed it out with “Clint Eastwood”. They brought the starsout as well. Guests included Lou Reed, Mos Def, Little Dragon, JamieHewlett, De La Soul, and former members of The Clash. Big thanks toSpin Magazine for the hook up!