Live Nation "optimistic" about band hitting the road next year. 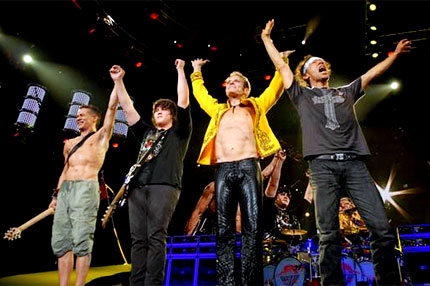 After wrapping up a massively successful reunion tour in 2008, Van Halen may gear up for another trek, which could be produced by Live Nation. In a conference call last week, Live Nation Chairman Irving Azoff told analysts he was “optimistic” about another Van Halen trek, according to USA Today.

“We have not officially announced a tour yet,” a Live Nation rep told SPIN. “Irving made a comment recently at a conference about a potential tour in 2011.” A spokesperson for Van Halen did not return requests for comment.

Azoff made his comments to outline Live Nation’s plan to revive the concert industry, which have seen ticket revenues plummet $200 million between 2009 and 2010. Azoff said he was also optimistic about tours for Fleetwood Mac, Christina Aguilera, and the cast of Glee.

Van Halen’s last tour — the band’s first with singer David Lee Roth in more than 23 years — was a huge success, grossing more than $93 million and drawing a million attendees over 74 shows.