The Irish band also have two other releases in the works, including a soundtrack to their Spider-Man musical. 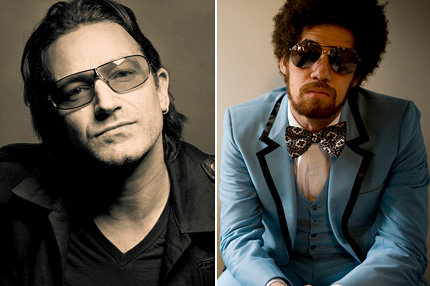 U2 refuses to slow down. Despite Bono’s emergency back surgery earlier this year, the rock icons are currently working on three — three! — new albums. First up is a collaboration with Gnarls Barkley mastermind and production whiz Danger Mouse.

“We have about 12 songs with him,” Bono told The Age. “At the moment that looks like the album we will put out next because it’s just happening so easily.”

And the wait for that album might not be too long. In early October, U2’s manager Paul McGuinness told the Irish Times that he expected the band’s next album to drop in early 2011, before the next leg of the group’s U.S. tour, which begins in May.

The second album on U2’s docket is what Bono’s calling a “club” record, which will feature Black Eyed Peas rapper Will.I.Am, French house DJ-producer David Guetta, and Lady Gaga’s collaborator RedOne. “U2’s remixes in the 1990s were a real treasure,” Bono said. “So we wanted to make a club sounding record. We have a pile of songs.”

Bono and the Edge are also trying to convince the rest of the band to record a concept album based on songs the duo wrote for the upcoming Spider-Man musical, Spider-Man: Turn Off The Dark, which debuts on Broadway in November. (Listen to a track here)

“We haven’t convinced [them] to do that yet,” Bono said. “[Drummer] Larry [Mullen, Jr.] definitely has a raised eyebrow.”