The R.E.M. frontman guests with the collabo between Snow Patrol's Gary Lightbody and R.E.M.'s Peter Buck. 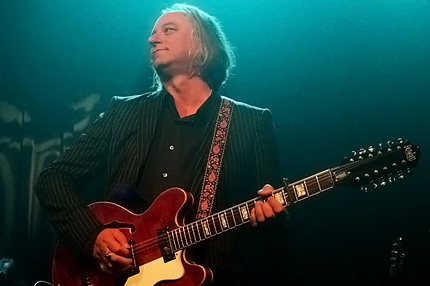 Lightbody has done this whole supergroup thing before. Back in 2001, the singer formed the Reindeer Section with members of Belle and Sebastian, Mogwai, Teenage Fanclub, and nearly everyone else in Scottish indie rock. The band produced two albums of classic rainy-day folk, but with an undeniably Celtic appeal.

As Lightbody exchanges reindeers for ponies, the question now, as the singer asked on Snow Patrol’s blog earlier this year, is “can an Irish guy write Americana?”

The answer is yes and no. Tired Pony certainly know the cadences and rhythms of Americana and understand its sense of wistful melancholy. But deep-down Lightbody is an arena-rocker and the majority of The Place is weighted with the high drama and ambiance of modern rock.

Which isn’t, in the end, a bad thing-particularly when it’s performed as well as it was last week. The Irving Plaza gig was only Tired Pony’s second ever (and their first in the States), yet the music benefited from the band’s ragged spontaneity. When you’ve got musicians as talented as Colburn and Buck on board, things can’t really go wrong.

The more successful songs were the more straightforward. In just two and a half minutes, album highlight “Dead American Writers” crystallized the band’s strengths. Lightbody sang his admiration for his unnamed literary heroes (“I have read your words a thousand times/ All inspired by smashed-up love and crime”), while Archer’s slide guitar and Jacknife’s Edge-worthy squalls of feedback made for a perfect blend of the folksy and the modern.

Buck’s contributions were consistent but never flashy. His 12-string electric guitar tastefully accented the rollicking urban nostalgia of “I Finally Love this Town.” While his mandolin playing, a fixture throughout the night, dominated the stage on “That Silver Necklace”-a song that inspired a group of fans to break out their glo-sticks, to the confusion of everybody else in the room, including Lightbody. “It looked like a field of wheat I saw on mushrooms once,” the singer noted after the song died down.

As exciting as the glo-sticks were, the highlights of the night were surely the surprise guest appearances. The Swell Season’s Marketa Irglova showed up early in the set to sing a supple duet with Lightbody (originally sung by Deschanel) on “Get on the Road” that managed to overcome the song’s maudlin lyrics. And later she sat behind the piano for a stark cover of Nick Cave’s “(Are You) the One I’ve Been Waiting For?”

With the show in Michael Stipe’s hometown, it was impossible not to wonder whether Buck’s most famous bandmate might stop by. Which he eventually did, ambling on stage later in the evening to take the helm on the haunting “The Good Book” (sung by Smith on Tired Pony’s debut). After Lightbody strummed a few chords to remind Stipe how the song went, the R.E.M. frontman–starring obliquely at a sheet of lyrics in his hand–managed a star turn as a bleary-eyed drunk estranged from his God-fearing wife: “You were saved by the good book/ I was saved by the half-full class/ So come on take a last look/ ‘Cause this party will be our last.”

Alone, Lightbody isn’t the timeless bard of American folk that he might wish to be. But as Tired Pony’s show proved Friday night, that matters little when he’s managed to surround himself with so much talent and healthy influence. So yes, an Irish guy can write convincing Americana–as long as he’s got Peter Buck by his side.

Setlist:
North Western Skies
I Finally Love This Town
That Silver Necklace
I’ll Carry You
Get on the Road
Dead American Writers
The Deepest Ocean There Is
I Am a Landslide
Silver Atoms
Your Bible
The Good Book
Point Me at Lost Islands
Pieces
(Are You) the One I’ve Been Waiting For? (Nick Cave cover)
The Creak in the Floorboards
Held in the Arms of Your Words

John Macdonald
Tags: Tired Pony, We Were There