L.A. rockers talk about how far they've come since their first fest appearance. 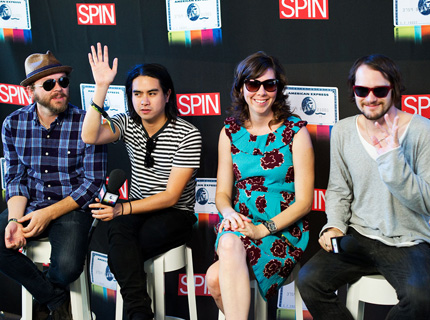 During this year’s Austin City Limits Music Festival in Austin, TX, artists stopped by the American Express® ZYNC ZONE, to chat with SPIN about their summer festival experiences and much more, among them Los Angeles rock quartet Silversun Pickups — watch our video interview, plus performance footage below!

The band’s weekend set was the last of their tour and frontman Brian Aubert was excited about it being at ACL.The band has been appearing on festival stages since 2007 when they pulled into Coachella.

“We arrived really early and they moved us on the mainstage,” Aubert said. “It’s hard for us to wrap our minds around how fast things were accelerating… we’re seeing all these bands now like LCD Soundsystem, like how the hell did this happen?”

See our exclusive interview with Silversun Pickups below, and click here to check out more interviews from the American Express® ZYNC ZONE!