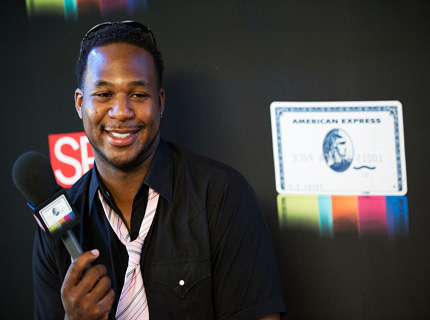 During this year’s Austin City Limits Music Festival in Austin, TX, artists stopped by the American Express® ZYNC ZONE, to chat with SPIN about their summer festival experiences and much more, among them pedal steel guitar wiz Robert Randolph, accompanied by his Family Band– watch our video interview, plus performance footage below!

For the past decade, Randolph has been blending soul, blues, funk and rock’n’roll to create a stirring sound all his own.This weekend Randolph met a man who his music had touched directly.

“It’s great for me to make music that uplifts people,” Randolph said.”Early this morning we had a guy tell me he was getting chemo and he didn’t think he would make it and he heard one of our songs and now he’s a cancer recovery patient, he’s fully recovered.”

See our exclusive interview with Robert Randolph below, and click here to check out more interviews from the American Express® ZYNC ZONE!Scalable, non-watermarked