Garage rock grrrls on their next album, working with Earth, Wind, and Fire's saxophonist, and loving Burt Bacharach. 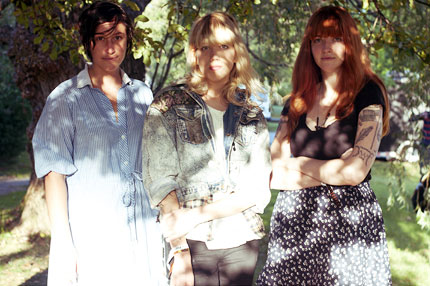 After forming in 2007, the all-girl trio quickly became critical darlings with their lo-fi, garage rock love songs, delivered in three-part harmonies that nod to 1960s girl groups. But backlash soon followed. “People poke fun at Vivian Girls and say that we can’t play our instruments,” singer-guitarist Cassie Ramone tells SPIN. “They say we’re a flash in the pan.”

“We are more seasoned musicians than before,” she says. “I’ve started to think outside the box a little.”

Hey, Cassie. How’s the new Vivian Girls album coming?
Great! We’re in the middle of doing overdubs. So the album is close to done. We’ve recorded 10 songs. We just need to make sure everything sounds great and then mix it. We’re recording at Rear House Studios in Brooklyn with our extremely talented friend Jarvis Taveniere, who plays drums in Woods. He records a lot of bands, including Real Estate. We’re not rushing the recording; we’re taking our time. The other two albums were recorded in small chunks of time. For the first album we only had enough money for three days in the studio. The second took eight days. This process isn’t like that. We started in late-August and work on the album one or two days per week. That gives us space; you can come back and actually hear the songs with a clear head.

What’s the significance of the album’s title, Share the Joy?
It’s actually a good story. So, Burt Bacharach and his lyricist Hal David are two of my absolute heroes. Together they are probably the best songwriting team of all time. Burt Bacharach’s melodies and arrangements have really inspired me, as have Hal David’s lyrics. They did a lot of soundtrack work in the 1960s, and soon worked on this movie called Lost Horizon. It was supposed to be this huge box office smash and all this money was thrown at it. But it was a commercial disaster. All the tensions that surrounded the process of writing the music ended with Burt Bacharach and Hal David not working together anymore. Both their careers became disasters. One song from the movie’s soundtrack is called “Share the Joy,” which is one of the most beautiful songs ever written. It’s so haunting. I love the fact that it’s called “Share the Joy,” but it doesn’t sound joyous at all. When you listen to it, it’s like there’s a ghost in the room.

It’s a little odd that Burt Bacharach is influencing Vivian Girls’ new album. How did you get interested in him?
Austin Powers! In the first Austin Powers movie there’s a scene in which Austin and Mrs. Kensington are riding a double decker bus in Las Vegas. They’re on a date and Burt Bacharach is singing “What the World Needs Now Is Love” to them. I was watching that movie and thought, ‘Oh, I love this song. That’s so weird.’ Over the next few years I realized that Burt Bacharach wrote some of these songs that I really loved, like the Carpenters’ “(They Long to Be) Close to You” and “(There’s) Always Something There to Remind Me.” When I was 15 or 16 years old my friends and I would walk to Barnes & Nobles, which had a used records bin in the back with Burt Bacharach LPs for $2. His songwriting is unspeakably beautiful. It’s had a massive influence on my music.

How do the new songs compare to your last two Vivian Girls releases?
A lot of people will say that this new album is less “lo-fi.” But I have an objection with that whole label. We never considered ourselves a lo-fi band. As somebody who’s friends with, or acquaintances with, a vast majority of the bands in the “lo-fi scene,” I’ve never heard a band describe their sound as lo-fi. It’s a term used by and for music journalists. We recorded our first two albums in nice studios. We thought they sounded good. We never wanted them to sound like shit. However, our tastes have become more refined. We know more about what we want our records to sound like than we did when we first started. It’s a natural progression.

Tell me about the lyrics.
The biggest lyrical difference is that there aren’t many songs about love. A lot of the content for the first two albums were about me — I write all the lyrics — dealing with the pain of rejection from certain romantic relationships. I don’t have that problem anymore; I have a really great boyfriend. So the lyrics deal more with other elements of my life that bring me pain, like the way our band is perceived. Those insults — that our band is a flash in the pan, or whatever — really hurt. I pour myself into my music. It doesn’t feel good to hear that stuff when you’re so serious about what you do. That’s the source of my major frustrations.

Do you feel like you have something to prove to those critics with this new album?
Yeah, in a sense. But at the same time I don’t want anyone’s perceptions of me to affect my music. The music I write is extremely intuitive. I never sit down with a guitar and say, ‘Okay, I’m going to write a song with four chords,lyrics about this, and a cool part in the middle.’ I sit down with a guitar and play around until something comes to me. This record is more advanced than the other two just because we’ve been on tour for so long. There are more guitar solos.

Besides Burt Bacharach, what artists are you listening to that are influencing the album?
Steely Dan has been a big influence on me lately. I got really into Steely Dan about a year ago. I’ve been looking up how to play their songs online, which has definitely taught me a lot. They’re geniuses.

Vivian Girls are playing a boat cruise in the Caribbean next year with other garage rock bands, like Black Lips, Strange Boys, Turbo Fruits, and others.
I’m really looking forward to it. It’s a full-sized Carnival cruise ship. They’re only selling around 400 tickets, but there’s space for 2,000 on the boat, which means there will be other normal people on the boat. So it’s going to be a bunch of crazy kids with the regular, old people cruise-goers. I bought a nautical dress for our set.

What’s up with your other band the Babies?
We just finished recording our first LP, which should be out in January [via Shrimper]. We’re planning on renting a house in Los Angeles for the winter and working on our next record down there.

You’re working on a solo album, too, right?
Yep. It’s pretty much done. We’re mixing right now. It’ll hopefully be out early next year. I’m really excited about that. It’s definitely different than Vivian Girls. For the solo album, I decided to record songs that either have different instrumentation than Vivian Girls and wouldn’t work with a three piece band, or songs that are too weird for Vivian Girls. There are songs on the solo album that are just strange. There are a few mellow acoustic songs. There are two songs with saxophone. I got Ira Raibon, who plays saxophone for Earth, Wind, and Fire, to make an appearance on it, which is cool. I love Earth, Wind, and Fire!!!

You also do more traditional art. Do you have anything planned with that?
Yeah. I’m in my art studio in Brooklyn right now. I do a lot of drawing with pen on wood panels. I’m working on this art show that’s going to be in Seattle in March. It’s my first-ever solo art show. For this particular show I’m recreating an aisle at Walgreens, which is one of the most popular drug stores in the Pacific Northwest. So far, I’ve made a lot of boxes of hair dye, bikini waxing kits, hair removal kits, fake eyelashes, and packs of underwear!