The singer-songwriter talks about his first festival experience. 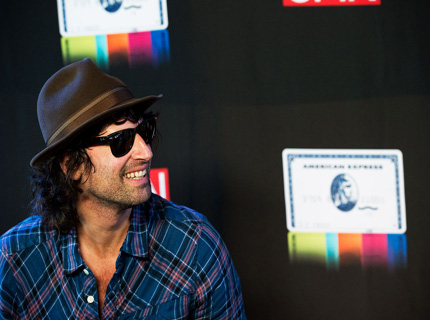 During this year’s Austin City Limits Music Festival in Austin, TX, artists stopped by the American Express® ZYNC ZONE, to chat with SPIN about their summer festival experiences and much more, among them New Jersey singer-songwriter Pete Yorn– watch our video interview, plus performance footage below!

Yorn said he thought about filling his ACL slot with older material but decided to go with new tracks off his 2010 self-titled release in an attempt to “win people over” playing his songs.

Yorn’s no stranger to festivals with his first being New Orleans’ Voodoo Fest around 2000 before his debut came out.

“I was on tour with Blues Traveler and it routed through there and we played on a little side stage and there were like forty people there to see us,” Yorn said.”Afterwards some guy gave me a hundred dollar bill and said, ‘I loved that set!’ It was the coolest thing ever.”

See our exclusive interview with Pete Yorn below, and click here to check out more interviews from the American Express® ZYNC ZONE!Scalable, non-watermarked