All 5 Nights: My Morning Jacket Live in NYC! 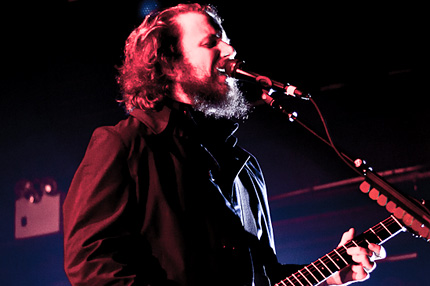 [EDITOR’S NOTE: We reviewed each night of My Morning Jacket’s Oct 18-23 concert stand at New York City’s Terminal 5. The band played their five albums over the course of the residency. Click through for reviews of all five nights. ]

Saturday night in New York City, with the final set of their triumphant five-night run, My Morning Jacket exhibited just how drastically they’ve changed over their 12-year-long career — and posed a question: What’s next?

With 2008’s Evil Urges, played in its entirety to a sold-out Terminal 5 (dressed up in velvet red curtains not unlike the album’s cover art), the band crafted their most eclectic work yet.

The differences between Monday night’s set playing their 1999 debut album The Tennessee Fire and Saturday’s closer were jarring. Evil Urges is wildly eclectic; MMJ never allowed the crowd get comfortable or bored.

The band masterfully shifted gears, from one genre to the next: the prog skronk of “Highly Suspicious”; the shadowy, electronic-flecked psych-rock of “Touch Me I’m Going to Scream Pt.1″; the brawny alt-rock of “Remnants”; the gorgeous country ballad “Look at You,” performed on acoustic guitar by frontman Jim James while guitarist Carl Broemel played lap steel in the wings; and the nu-roadhouse boogie of “Aluminum Park,” which had Broemel pulling out some impressive high kicks onstage.

The set’s standouts were “Smokin’ from Shootin'” and set closer “Touch Me I’m Going to Scream Pt.2,” two of the most impressive songs from MMJ’s catalogue, which strike a balance between the band’s past and future. The former unfolds in layers of distorted guitar, lap steel, reverb-y keyboards, ambient noise, then crashes with a careening riffs, rolling-thunder drums, and James pleading, “Distance — coming or going, come on?” like he’s unsure of what’s next.

“Touch Me I’m Going to Scream Pt.2,” the much weirder cousin to Pt. 1, meanwhile, started with James playing a funky-weird melody that sounded like a video game score on a small keyboard, then picked up into a Bee Gees-on-acid disco jam with fast dance beats from the lion-maned Patrick Hallahan. Then it all went dark. James played a sinister electric guitar riff that sounded like it could signal the rise of a vampire from his castle, as Broemel summoned a dark storm of feedback. James shrieked into the mic, his voice echoing for minutes, as song closed out completely different than it started. Just like MMJ.

“We are the innovators,” My Morning Jacket’s frontman Jim James sang Friday night on “Wordless Chorus,” the blooming psych-pop opener to the band’s fourth album, Z. That verse was an apt intro to the Louisville, KY, quintet’s benchmark 2005 release.

After three LPs of reverb-drenched Southern rock and folk, MMJ took a giant artistic long-jump forward with Z, 10 tracks of experimental psychedelia mostly devoid of their former alt-country sound, often referred to as America’s reply to Radiohead’s OK Computer. At Terminal 5, on the fourth of their five-night run playing their entire catalogue in concert, the band reminded a sold-out crowd of the album’s importance.

The strong opening of “Wordless Chorus” set the tone. The album’s next track, “It Beats 4 U,” a rhythmic tidal wave with icicle synths and glimmering, U2-ish guitar, added to the vibe, and the third track “Gideon” proved what a cohesive, flowing effort Z truly is. An epic angel’s song with James crooning about religion (a popular topic for him), the track closed with a shower of guitar riffs, as James pled in his stratospheric falsetto, “Listen!!!!!!!!!!!!” Just then hundreds of glow sticks came falling from all three floors of the venue. Yes, with Z, MMJ have entered glow stick territory.

The band brought the light show to accompany the music – a frenzy of blue spotlights over an eerie red backdrop, which flashed as the band lifted the mood with the reggae rocker “Off the Record” and the “Into the Woods,” a tune that sounds like a creepy jingle from a Carnival freak show, with lyrics about “kittens on fire” and a “babies in a blender.”

There was hardly any sign of MMJ’s former lovelorn, alt-country selves.

“Anytime” hit hard with a monster-truck riff and pulsing keyboards; “Lay Low” found James doing his best blue-eyed soul over clacking drum machine beats and guitarist Carl Broemel’s repeated one-note licks The song fragmented into drum, bass, and key solos and stretched into a long jam with dual guitar solos, played as James ran circles around Broemel. Even in their weirder moments, MMJ still like to jam out.

Z was a definitive sea-change for MMJ, breaking down the boundaries for their future work. It’s an album people will be talking about decades from now.

After revisiting their first two albums for their five night stand at New York’s Terminal 5, My Morning Jacket returned Thursday night to perform the album that scored them mainstream attention, 2003’s It Still Moves.

“This has been a very weird process,” frontman Jim James told the crowd of revisiting their albums live, “taking lots of weird memory lane paths.”

But you’d never know it from the show: My Morning Jacket delivered a hot, non-stop party for a stoked sold-out audience, ripping through massive Southern-fried anthems like “Dancefloors” and psychedelic monsters like “Run Thru,” which featured Tommy Blankenship unleashing guitar fills like a young Stevie Ray Vaughn.

When MMJ released It Still Moves, they showed off their improved versatility as songwriters and it was easy to see last night the connection between the band’s rag-tag alt-rock beginnings and their more experimental, Radiohead-esque ambitions on later albums like Z.

On “At Times Throughout,” MMJ brought out a horn section to deliver a soul rave-up as if they were the Band while on the delicate, loping “I Will Sing You Songs,” Jim James showed off the group’s more modern, atmospheric side – not to mention his powerful, full-throated voice, easily one of the best in rock. For “One Big Holiday,” MMJ delivered the night’s biggest anthem, sparking a massive singalong from a crowd that was heavy on bearded, high-fiving bros.

It Still Moves is not MMJ’s best album – but judging by their raging, high-energy performance last night, it’s definitely their most fun.

My Morning Jacket, Night 2, At Dawn

Before they were Louisville, KY’s answer to Wilco, My Morning Jacket were wide-eyed Southern boys who served a relative straight-shot of below-the-Mason-Dixon-Line rock and folk. That MMJ, the one from 2001, visited New York City Tuesday night.

“We’re taking a psychedelic trip through the past,” frontman Jim James told the crowd at Terminal 5, where the quintet played their 2001 sophomore release, At Dawn, in its entirety. “No, really, it’s a total trip to revisit our past and to be back in that headspace again.”

The show — night two of a five-night stand, in which the band is playing all their albums in chronological order — was a no-frills reminder that MMJ are one of America’s Best Live Bands, and that James is one of the best singers and intensely passionate songwriters around.

The show was alternately heavy and rockin’, heart-wrenching and tender, but always musically gorgeous. After the self-titled acoustic opener, the band — James, guitarist Carl Broemel, drummer Patrick Hallahan, keyboardist Bo Koster, and bassist Tom Blankenship — kicked it up, adding rock muscle to the pastoral, lilting melodies of “Lowdown” and the misty vocal slowdance “The Way That He Sings,” on which James croons about love giving him security in a frightening and ever-changing world.

Soon the stage went to James alone, who played “Hopefully” and “Bermuda Highway” with accompaniment from Broemel in the wings. Later, he plucked the haunting “If It Smashes Down” solo on banjo, as James’ soaring mountain-high voice, came into focus, without cover of reverb-soaked guitar.

Still not convinced of their Best Live Band reputation? Well, after all the gothic Southern riffage and lyrics of love, the boys got down and had a little fun during the encore, playing a spot-on rendition of the Rolling Stones’ “Miss You,” bringing a fun feel to a show that otherwise heavy on the heart.

In 1999, My Morning Jacket released their debut album The Tennessee Fire to little fanfare – it’d be another four years before they’d break out nationally with It Still Moves.

But at Monday’s kick-off show for their five night residency at New York’s Terminal 5 – where the group performed their debut in its entirety – Jim James and his band proved they’ve grown into one of the country’s great rock ‘n’ roll bands with a killer two hour gig.

“It’s About Twilight Now” – which featured a guest spot from original guitarist Johnny Quaid – evolved from a Sun Records-era rockabilly tune into a jammed-out monster, with Quaid playing as if he was The Heartbreakers’ Mike Campbell. “War Begun” got a similar improvisatory treatment, starting as a cool, jazz-funk vamp before taking off into a near-metal anthem.

But it was the quieter tunes that earned MMJ some of the biggest cheers of the night. James delivered a stunning solo rendition of “Picture of You” – dude should record a solo album stat – while the rest of the crew offered an atmospheric take on “Butch Cassidy.”

After wrapping up the full-album performance, MMJ celebrated with a seven-song encore of rarities and covers, with James offering one of his only comments to the crowd that night: “How you guys doing!” he shouted.

Check back throughout the week for SPIN’s full reports from each night’s show.

SPIN Staff
Tags: My Morning Jacket, We Were There