"We were shooting out in the desert heat so it was tough, but fun," guitarist Ray Toro tells SPIN. 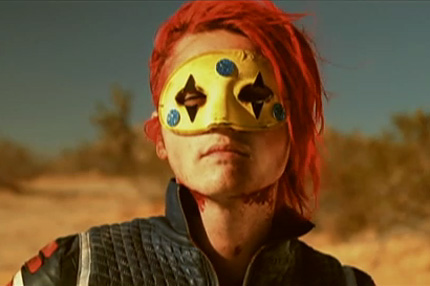 My Chemical Romance recently teased behind-the-scenes footage of their video for “Na Na Na,” a punk anthem from their upcoming album Danger Days: the True Lives of the Fabulous Killjoys (out Nov. 22). Now, the quartet has unleashed the full clip, which follows My Chem’s fictional Killjoys crew on the run from a band of vampire-masked goons. Check it out below.

My Chem guitarist Ray Toro tells SPIN that the concept for the video — a hyper-stylized homage to camp movies like Faster, Pussycat! Kill! Kill! — happened accidentally: the group decided to expand on the theme for a trailer to promote the album only after seeing an enthusiastic response from their fans. “It was never intended to be a video,” Toro explains. “[But] the response we got was so big that we were like, ‘Oh shit, now we have to do a full video for this thing.’ We came up with some more ideas to flesh out the trailer.”

Turns out the band will go to any lengths to satisfy their rabid audience. My Chem spent a marathon day in the desert filming the video last month, arriving on-set at 6 A.M. and wrapping up around 9 that night. “We were shooting out in the desert heat so it was tough,” Toro says. “But it was fun.”

What do you think of My Chem’s video? Sound off in the comments below.