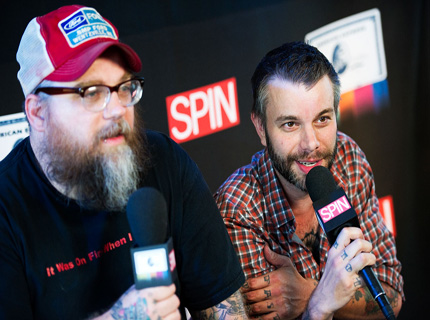 During this year’s Austin City Limits Music Festival in Austin, TX, artists stopped by the American Express® ZYNC ZONE, to chat with SPIN about their summer festival experiences and much more, among them Memphis alt-country vets Lucero — watch our video interview, plus performance footage below!

Lucero frontman Ben Nichols is a big fan of the festival set-up, even if his band hasn’t been playing them for too long.”Festivals today are really important and we hadn’t done a whole lot until this year and these things are crazy,” he said.”It’s bright and daylight and there’s a ton of people.”

That daylight is the one thing that seems to be hampering the band’s style when performing at fests.”If they would build a little tavern, like somewhere dark and cold where I could drink whiskey, that’s what I miss at the festivals,” he said.

Nichols also mentioned the band has a new record coming in 2011 and they might be going in a new direction.

See our exclusive interview with Lucero below, and click here to check out more interviews from the American Express® ZYNC ZONE!Scalable, non-watermarked