Now that they're on top, the Followill boys plan to stay there the same way they got there: by not giving a damn what anyone thinks. 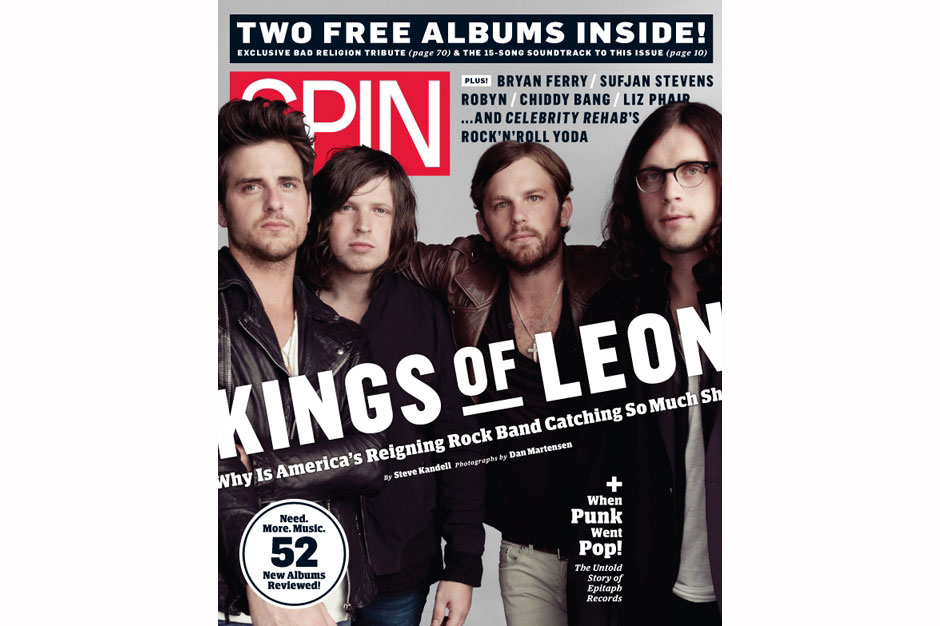 Now that they’re on top — the No. 1 targets for snarky haters and incontinent birds alike — the Followill boys plan to stay there the same way they got there: by not giving a damn what anyone, of any species, thinks.[Magazine Excerpt]

It is the first of September and the Kings of Leon frontman has pulled down his pants, as rock stars are wont to do, showing off his war wounds, contusions suffered while diving off a yacht in Italy a week ago. But he’s gotten off easy compared to his older brother Nathan, who tore the labrum in his right shoulder adjusting a catamaran sail and who needs said labrum to beat things with a stick for a living, and his cousin Matthew, who broke his pinkie toe — black like a rotten banana, the nail painted Hulk-green for that extra gangrenous flair — in a futile effort to save a falling beer. Nor did his younger brother Jared escape the vacation unscathed; he got a bloody nose for two days — hey, what are you snickering at? — after landing in the water with his face turned the wrong way. Even newly recruited touring guitarist-keyboardist Chris Coleman has bruises on his inner thigh from diving. Mo’ money, mo’ problems.

Still, though: It’s good to be the Kings.

“Kings of Leon may now officially be the biggest rock band of — or at least by — the ’00s. [They] did this in the Internet age, despite the fact that pretty much every music blogger I know actively despises them. Congratulations, Kings of Leon. You still suck, though.” — Phoenix New Times, March 2010

“We went to the U.K. for the first time while we were recording [debut album] Youth & Young Manhood,” says Caleb, 28. “?’Red Morning Light’ off our EP was doing well, but we didn’t know anyone knew who we were. We stepped off the plane with our long hair, hung-over, and three minutes into the car ride, the song comes on the radio. We pulled over and danced, and by the time we got to the hotel, it came on two more stations. A magazine over there booked us for this up-and-coming tour they do, and we were shitting our pants. We’d played less than 15 concerts ever, and these were all seasoned bands. I remember before going onstage for the first show, we smoked a massive joint just to calm down. But from the beginning, people could see — maybe it was the way we looked at each other while we were playing, I don’t know — something that they wanted to see. Every other band playing that tour is gone now.”

For the first time ever, the following words will not appear in a Kings of Leon story: “traveling preacher.” Except for just then.

At some point in rock history — oh, let’s just say 1991 — notions of stardom and success got hopelessly tangled with those of humility and modesty, and ever since, bands that openly courted the former were looked at suspiciously. Huge became a four-letter word. Kings of Leon’s career arc — underachieving buzz band kept afloat by just enough expense-recouping overseas adoration for them to finally reach karaoke-bar ubiquity on album No. 4 — is a rare contemporary case study of a group that’s had a fairly traditional ascent. Wanting it bad, never looking like they need it. “Sex on Fire” and “Use Somebody,” from 2008’s six-million-selling Only by the Night, brought the band the mainstream success they coveted, but you can’t get that big these days without an equal-size helping of backlash. They’d already gotten their sloppiest rock-star indulgences andhijinks out of their systems when no one was bothering to look. What was going to trigger it if not their own clumsiness?

“I’m enjoying my obscurity,” whispers Nathan. If he speaks any louder, Roger Federer will hear him, and the man is trying to serve.

Nathan Followill is famous enough to call in front-row tickets for the third round of the U.S. Open with a couple hours’ notice, but not enough that anyone gives him a second glance. “If this success had happened seven years ago, we’d be in rehab, dead, or in prison. This came to us after we’d toured enough to respect it. So many bands work to reach this point, then the workload triples if you want to stay here. I love this lifestyle — what can I do to keep it?”

But the question really is, what wouldn’t he, or anyone in this position, do? For all their relative comfort with the trappings and vagaries of the music business, Nathan is quick to point out that the band has turned down way more lucrative tour and placement offers (sorry, Gleeks) than they’ve accepted, and they’ve likewise been skilled at staying out of the papers for non-music-related reasons. “I won’t name names, but a fellow headliner at a festival we played recently bad-mouthed us, and if that’s all anyone is talking about the morning after your set, guess what: We win. We keep our mouths shut and do what we do, and we’ll see their girlfriends backstage at our next show. An entertainer is known for everything except what they do with their instruments, and we’re not entertainers. You’ll know what band I mean when you see the press release announcing I’m in jail for hitting a couple girls.”

Then again, Nathan also insists that his brawlin’ days are behind him. A dustup between Nathan and Caleb a couple years ago resulted in Caleb needing shoulder surgery, but any thoughts that the Followill brothers might become the American Gallaghers are fading as the cocaine gives way to common sense. “Now if Caleb pisses me off and I break his nose or break my hand, we’re still brothers and we still apologize the next day,” he says, “Only now we can’t play a show. I’m 31, I’m falling apart as it is.”

Federer beats German Andreas Beck in straight sets, far more eager to get out of the frizzle-fry heat than the cocktail-sipping spectators. The second the match is over, the photographers right in front of us turn their comically large telephoto lenses over Nathan’s shoulder to snap iconic Vogue editor Anna Wintour, sitting several rows behind us, the closest thing to a boldfaced name on a Thursday afternoon. Well, second closest, really.

“What, no pictures of me?” Nathan mutters. “Don’t you guys know I’m in Nickelback?”