Rappers set to hit studio in South of France to record full-length Watch the Throne. 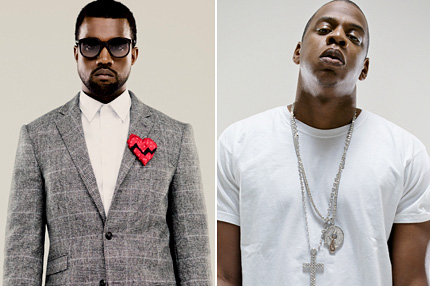 Kanye West hasn’t even released his new album My Beautiful Dark Twisted Fantasy (due in Nov.) yet, but the rapper is already prepping his next move: recording a full-length album with Jay-Z.

In an interview with MTV after the premiere of the epic video “Runaway,” West revealed that he and Jay-Z will record the album, titled Watch the Throne, at the end of the month in the South of France. “We’ll probably be done in a day or whatever,” West said. “It’s really easy. [Jay-Z] only has to think of ten verses.”

Back in August, West announced that the two had recorded five songs to be released as a shorter five track EP. Instead, West released some of those tracks – “Monster” and “So Appalled” – as part of his G.O.O.D. Fridays music series. West also says his collaborations with Jay will appear on Fantasy. “We have done five [songs] so far and then a few of them were out there and I put ‘em on my album,” West said. “Sorry, Jay.”

In the same interview, West also talked about turning “Runaway” into a Broadway production and his plans to develop a television cartoon based on the characters in the video. Watch the full interview here.