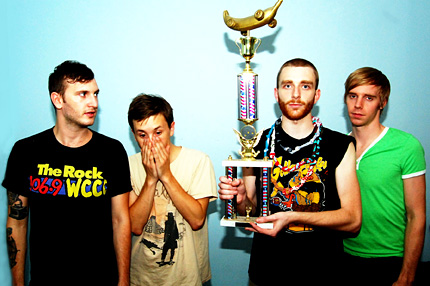 Bear Hands broke out in 2007 as a New York buzz band thanks to a strong debut EP Golden. But it’s taken three years for the group to wrap up recording their debut full-length – normally a death sentence for an indie rock band trying to survive the hype-then-kill cycle of music blogs.

In this case, the wait was worth it: Burning Bush Supper Club, which hits stores next week, is an 11 song psychedelic-funk monster that advances the quirky hooks and fist-pumping anthems of MGMT’s debut Oracular Spectacular. Which makes sense: frontman Dylan Rau was classmates at Wesleyan with MGMT’s Andrew VanWyngarden and Ben Goldwasser, who picked Bear Hands as an opening act for a few gigs.

Highlights from the album include the slinky electro-funk single “Crime Pays” (which Rau admits was inspired by personal experience) and the propulsive kraut-rocking jam “Belongings Option.”

Rau especially likes “Wicksey Boxing,” which he says is about getting plastered and fighting with your buds. “‘Wicksey Boxing’ is when you get drunk on whiskey and you try to say whiskey boxing but it comes out wrong,” he says with a laugh. “It’s happened to me a lot – I broke a rib nine months ago after boxing my friend.”

Check out an exclusive stream of the entire album below – and head here to see when Bear Hands are coming to play in your town. The group kicks off a national tour in Raleigh, North Carolina, on November 5.

SPIN at Voodoo 2016: Day 1 at Toyota Music Den with Chairlift, All Them Witches and More