Red Hot Chili Peppers' drummer gets his jam on with band The Bombastic Meatbats. 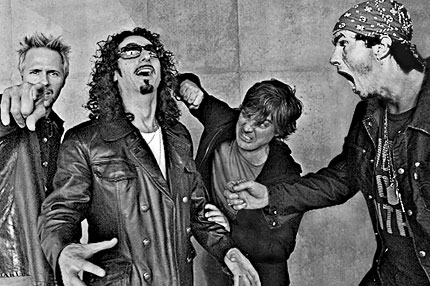 When he’s not playing drums in his day jobs with the Red Hot Chili Peppers or supergroup Chickenfoot, Chad Smith cuts loose with a jazz-funk-fusion side-project dubbed The Bombastic Meatbats. Smith – along with guitarist Jeff Kollman, keyboardist Ed Roth, and bassist Kevin Chown – have dropped their second album and the set is crammed with enough thrilling, stretched-out tracks to give a Phish-head a contact high. Check out a stream of the song “And We All Swing the Tuna” below.

Smith tells SPIN.com that the album is meant to be a loose, carefree project, from groovy psychedelic numbers like “Mountain of Meat” to goofy song titles like “Dr. Blotter & Miss Purple (Ride in the Echoplex).”

“We’re not trying to compete with the Lady Gagas of the world – this is just a fun thing for us,” Smith says. As for the meaning of the title “And We All Swing the Tuna” specifically, Smith reveals it was inspired by a real-life run-in with a couple he discovered mid-coitus at his rehearsal space.

“I think shortly before I arrived they were engaged in some sort act, him pleasing her in some way,” Smith says with a laugh. “Well, that’s what the overall sense of what was wafting through the room. When I told my guys in the band about it, I just said somebody was swinging a 30-pound tuna in that room.”

Smith is hitting the road for a few select dates in late-October and early-November; check out itinerary here and stream “Tuna” below.

The Bombastic Meatbats, “And We All Swing The Tuna”