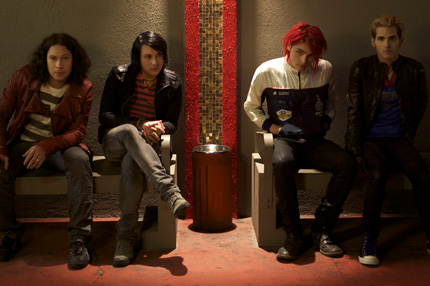 My Chemical Romance will release one of the year’s most anticipated records on November 22, and SPIN.com has an exclusive 15-second snippet of the new song “Planetary (GO!),” which finds the band experimenting with a pop-funk direction. Check it out below.

In addition to featuring the song on their new album, My Chem have teamed up with Sony to feature the track in the forthcoming video game Gran Turismo 5 for PS3, due out later this year. But it’s not like My Chem licensed the song just for a check – turns out they’re big fans of the game. “I remember playing it and loving it years ago,” says guitarist Ray Toro. “And I think you hear that song and it just makes you want to drive faster. There’s so much energy on the track.”

As for Toro’s driving skills in real life, he says he’s a bit of a scatterbrain behind the wheel: “I’m constantly doing other things while I’m driving. Frank [Iero, My Chem guitarist] makes fun of me cus I’ll be like mixing demos on my computer while driving. I hate wasting time. But I’ve only been in one major accident – I don’t know if that’s a good or bad thing.”