EXCLUSIVE: Kings of Leon, Behind the Scenes

INTERVIEW: See the Tennessee band in action at their SPIN cover shoot in New York City. 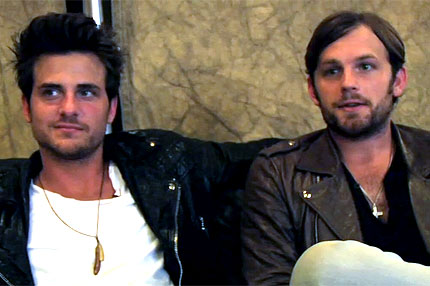 Kings of Leon are back with a new album, Come Around Sundown, and the quartet dish about their careers, lives, and success in the cover story of SPIN’s November issue – read excerpt here.

And below, watch exclusive video footage, including an interview with Caleb and Jared Followill!

“We wanted to create this relaxed party vibe,” says SPIN photo director Michelle Egiziano of the shoot, for which she brought in a ping-pong table, a dartboard, and couches. Adds photographer Dan Martensen: “We wanted it to feel like home. If I were hanging out with the band, I’d want to have a drink, a joint, and goof off.”

Mission accomplished. The day was more of a party, with the Followills playing darts, beer-pong, and smoking… ahem… something…