French popsters hit the discothÃ¨que with "Love Like a Sunset Pt 3." 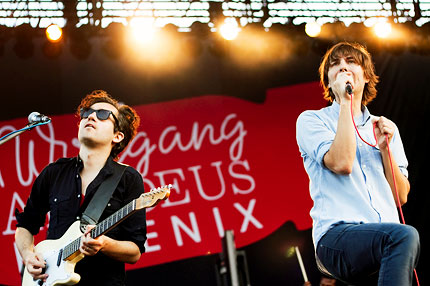 Those boys in Phoenix — so giving!

Just a week after offering a free making-of documentary about their Grammy-winning album Wolfgang Amadeus Phoenix, the French pop outfit are offering one of its outtakes, “Love Like a Sunset Pt 3,” as a free download in exchange for a Tweet. Click here to get started, and listen to the song below!

Compared to part one and two, both of which made the album, part three is longer — clocking in at nearly nine minutes — and more dance-y, with club-ready grooves book ending the atmospheric and gorgeous theme of the original. Discothèque!

Phoenix are currently touring the U.S. and will headline New York City’s Madison Square Garden on Oct. 20, with support from Dirty Projectors.

Listen to Phoenix’s “Love Like a Sunset Pt 3,” then tell us what you think in the comment section.