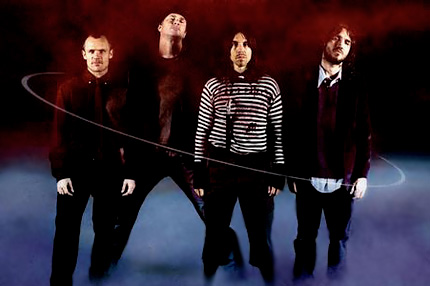 After going on a break in 2007 and weathering the departure of guitarist John Frusciante, Red Hot Chili Peppers are back in the studio working on a new record, which the band is hoping to release in Spring of next year.

For the still-untitled album, Anthony Kiedis, Flea and Chad Smith have roped in touring guitarist Josh Klinghoffer for lead duties and the band is teaming up once more with longtime producer Rick Rubin. “We really trust him,” drummer Chad Smith tells SPIN.com of working with Rubin. “He’s really helpful when you play him songs you’ve worked on for a long time – he hears them and he gives his objective opinion, he’s not emotionally attached to the songs like we are. It’s good to have that.”

Expect the band to branch out from their funk-pop sound on the new LP. Smith says Flea – who recently toured with Thom Yorke in the group Atoms for Peace – is stepping up his songwriting contributions with tunes he’s written on piano. “That’s a different thing,” says Smith. “There’s quite a wide variety.”

Smith also adds that the band is experimenting with some Afro-pop styles, which were inspired by a trip that Flea and Klinghoffer took to Lagos, Nigeria and Ethiopia and Smith’s recent obsession with an obscure compilation The Afrosound of Colombia. “There’s crazy shit on that,” says Smith. “That music just moves to a different groove, it’s not your typical Western four-four. The rhythms are so infectious.”

Still, it’s not like the next RHCP record will be a full-on Fela Kuti rip. “We’re not trying to cop that thing but we’re just doing our take on it. Hopefully we’ll come up with something new.”