Called a lunatic and a wreck by Anthony Kiedis -- his friend! -- Forrest was also the charismatic leader of one of L.A.'s greatest cult bands. Here's how he survived a life of addiction and turmoil to become the seen-it-all face of Celebrity Rehab. 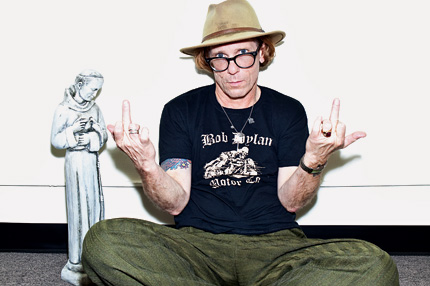 Called a lunatic and a wreck by Anthony Kiedis — his friend! — Bob Forrest was also the charismatic leader of one of L.A.’s greatest cult bands. Here’s how he survived a life of addiction and turmoil to become the seen-it-all face of Celebrity Rehab.[Magazine Excerpt]

This was not Bob Forrest’s rock bottom. That came later. This was more like a pit stop on the way down. He had seen his band Thelonious Monster become a buzz sensation of the L.A. club scene, while he himself landed a huge solo contract with RCA. But by 1993, just a year after Thelonious Monster’s major-label debut, Beautiful Mess, Forrest was exterminating himself with heroin and crack, barely listening to, let alone making, music. He dimly knew his friends were talking about this thing called grunge and had heard that Kurt Cobain liked his band. This long-ago day crystallized how low he had gone.

Forrest was making deliveries for a dealer, taking packages to Hollywood’s rich and wasted. One day while hanging out at a meeting spot, he was smoking crack in the corner of a room when two guys came by for a pickup. MTV was on the screen, playing a video by the band of the moment, Alice in Chains. And the guys who had just arrived were on the screen. Here was half of Alice in Chains, stopping by to spend some of their royalties. All Forrest could do was seethe quietly: “What the fuck was going on? I wondered. I’m being passed, I’m being left behind.”

These days, Bob Forrest sometimes still has to tell people, “I used to put out CDs.” But most everything else about his life has taken a surprising direction. After 24 stints in rehab, he got clean and sober, became a drug and alcohol counselor. Lately, he’s enjoyed a bizarre second act, as Drew Pinsky’s right-hand man on VH1’s addictive Celebrity Rehab. He is 49, spends the week in Hollywood and the weekend in Joshua Tree, out in the desert. He and his girlfriend are expecting a boy in October. (He has a grown son from a previous marriage, who plays music, sometimes with his father.)

He just recorded the title song for Bob and the Monster, a documentary about his rise, fall, and belly flop out of the grave. He also DJs at Internet radio station indie1031.com. With Celebrity Rehab colleague Shelly Sprague, he recently opened Hollywood Recovery Services, a treatment center right by the street he lived on when he was homeless. Hanging on a wall at HRS: portraits of Darby Crash and Ian MacKaye, two punk heroes of Forrest’s — one a drug casualty, the other a straight-edge icon — two ways he might have gone, if he hadn’t gone somewhere else.

That unlikely path has led him to this Los Angeles lawn, on a sunny July morning. Forrest — old-school horn-rims and an Indiana Jones hat framing his sallow, pockmarked face — is deep in conversation with Pinsky, addictionologist to the famous, about an insurrection an ex-model and a movie star are fixing to wage today inside at the Pasadena Recov-ery Center, a.k.a. the Celebrity Rehab set. It’s the first week of shooting the show’s fourth season, and just today the cast was finalized, movie star Eric Roberts (weed) added to a lineup that includes ex-model Janice Dickinson (alcohol), Jimmy Carter–era teen idol Leif Garrett (heroin), Tiger Woods mistress Rachel Uchitel (pills), and four others of varying degrees of infamy.

“I just wanted to say thank you, both of you,” Starr says, more like a fan than a patient. “I’m doing okay.”

“Our one success story,” Forrest jokes out of earshot of Starr, to whom he supplied drugs a lifetime ago. But, really, Forrest is his own biggest success story.

For some addicts, the disease is written into their genes. For Bob Forrest, it was printed in neon: Dad was a drinker who designed commercial signs while living in Palm Springs, California. Forrest grew up thinking the couple that raised him were his parents, but they were actually his grandparents. His sister was really his mom. He found out when his folks got drunk one night and accidentally let it blurt.

Palm Springs was full of retirees and vacationers who came for the awesome golf. Dad had buddies over all the time; big-time golfers such as Lee Trevino and Julius Boros, who gave the kid lessons. By the time he was 11, Forrest was pretty good. In high school he was one of the top-ranked amateur golfers in the state. But he wasn’t going out at night to practice his stroke. Sometimes he’d tell his folks he was staying at a friend’s, but he’d be with buddies getting fucked up at the Indian Wells course. They would steal golf carts and play demolition derby all night long, piss in plastic bags, and stick them in the first hole, a gift for the duffers who reached down to retrieve their balls.

“Golf is really the same thing as sobriety,” he says today. “You think it’s about something else or somebody else or a competition, but it’s really about how you accept what happens. And I couldn’t do that, I couldn’t accept hitting 77. I would just want to kill myself.”

Eventually he left the desert for community college at Huntington Beach. By his 21st birthday, he was DJ’ing at the Cathay de Grande, a legendary devil’s den for L.A. punkers. He was spinning a Defunkt single one night when this brat bum-rushed the booth, took the record off, and told Forrest he was playing the wrong side. The DJ called security, and the intruder shouted, “My name is Flea, I’m the bass player in Fear, and I can do whatever the funk I want!” Soon they were pals. A few weeks later, Flea moved into Forrest’s apartment, and his buddy Anthony was right behind him.

It was spring of 1983. His flatmates were performing as Tony Flow and the Miraculously Majestic Masters of Mayhem and later as Red Hot Chili Peppers. Forrest roadied for them. He was argumentative and opinionated even when sober; fucked up, he lost any remaining inhibitions about telling the band what they should do next.

In his 2005 memoir, Scar Tissue, Anthony Kiedis remembers Forrest as “Lunatic Bob Forrest, the then–King of Exaggerations, Rumors, and Lies.” He was “a guy who couldn’t manage five dollars” and “a drunken wreck…bitter and angry,” not to mention “the classic shit-stirrer of the city.” Oh yeah, and “a tortured musician working as a roadie.” Forrest isn’t happy about the descriptions, but he and Kiedis remain friends.

“I was sitting there like, ‘Who the fuck are you to be challenging me?’?” Forrest says. “That’s all I could hear. Now I see how it took a lot of guts to orchestrate everything, confront me, and tell me how I was making a joke out of everything.”

In six months, Slovak would be dead of a heroin overdose. The jokes kept rolling.

Thelonious Monster, the band Forrest put together in 1984, wanted for boundaries. At first they had four guitarists, later they’d have at least as many managers. Their debut album, 1986’s Baby…You’re Bummin’ My Life Out in a Supreme Fashion, was bluesy, jazzy, snaggle-toothed singer-songwriter pop blaring through a busted speaker. They were juggling-barely — Forrest’s antics and his ambi-tion. One minute he was singing with open-voiced sincerity, the next he was picking a fight with one of the guitar players.

“I was a young girl from New York just moved to Los Angeles,” says Bob and the Monster director Keirda Bahruth. “Somebody told me about Thelonious Monster, and I went to a show. There was no line between the band and the audience, and I felt like I was a part of something.”

Anchored by two raw-nerve folk-rockish classics, the band’s third album, 1989’s Stormy Weather, brought the music into focus. “Sammy Hagar Weekend” skewered — or is that celebrated? — the arena rock he grew up on, while ruefully giving a hey-ho to wheel-spinners everywhere: “We’re gonna drink some beer, smoke some pot, snort some coke, and then drive, drive over 55.”

“Lena Horne Still Sings Stormy Weather” was a shambling talking blues about how you can’t give up on changing things. “Talking blues,” in fact, might be a good description of the man’s modus, as much as he had one, he was bursting to communicate.

“Bob’s a really good singer,” says John Doe, who produced Stormy Weather. “He has a lot of heart and he was always putting it out there and not holding back. Mostly, he’s not afraid. Bob was always willing to confront painful subjects.”

Says Forrest, “We were so good for periods of time. I remember playing some place in the Midwest. We had gone on at midnight and walked off at 2:30 and realized — holy fuck, we played great for two and a half hours.”

“He was the easiest guy to talk to, the nicest guy in the world, pretty much like he is now,” says longtime friend and former drug buddy Gibby Haynes of the Butthole Surfers. “Even if he was shirkin’, he was just good to have around. I remember when I introduced him to Johnny Depp — about a day after he met Johnny, he was living in Johnny’s house and Johnny’s like, ‘He’s the coolest guy in the fuckin’ world!’?”

On the one hand, Forrest was a promising songwriter, with a knowledge and love of pop music and movies that gave his lyrics reach and surprise. On the other, he had bought the Bukowskian hooey that real artists are always onstage.

At the Cathay de Grande, he once saw local legend Top Jimmy and his wife trading blows. The next day, the club’s manager explained to the young Forrest, “First thing you gotta remem-ber about Hollywood, Bob, is everybody here thinks a book or movie is being made about them.” He took a lesson from that, just not the intended one. When he was 19, Forrest pestered Top Jimmy to help him score heroin for the first time. It took just two weeks of convincing before Bob was ready for Hollywood.

He went on local radio and trashed his label weeks after one of his CDs came out, giving the label a really good reason to promote the thing. Cracked out, he mangled “The Star-Spangled Banner” before a Clippers basketball game, which got repeated for weeks on local sportscasts. RCA spent $450,000 on a solo album that never got released.

He brawled with cops, bouncers, other bands. “The worst shows, to me, were when people got hurt,” Forrest says, sitting in his HRS office, his face twisted in pain. “I remember jumping in the audience and punching people. There was an anger to us, for sure. And part of it was we were so unhealthy as people, but another part of it was this frustration — we were trying our best, and there’s some great music on those records.”

Forrest has spent way too much time wondering why the Chili Peppers went one way and the Monster another. “It seemed to me we were producing things that weren’t much different than bands having success,” he says. “I thought people who liked Soul Asylum and the Replacements would like us. Then I saw Soul Asylum play the White House while I was still playing Al’s Bar.”