MGMT-cribbing college dropouts find success by following their own curriculum 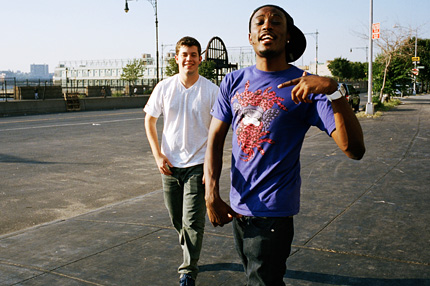 Selling weed brownies to buy food at the dining hall, cutting class to be in the studio, and missing exams to play parties in New York City.” That’s how rapper Chidera “Chiddy” Anamege describes his college experience, which means it’s a good thing he and Noah Beresin, a.k.a. Xaphoon Jones, the beat-making half of lovably cocksure Philly duo Chiddy Bang, found a nonacademic way to make higher learning count.

Chiddy, 19, a former business major who developed his flow freestyling on the streets of Newark, New Jersey, and Xaphoon, 20, who worked as a gopher for local recording studios before pursuing a music industry degree, met as Drexel University freshmen in 2008. Living on campus, they bonded over a mutual love of faking Philadelphia hip-hop slang at the expense of gullible out-of-town students (e.g., swapping “swelly” for “swag”), and as Chiddy says, “sampling all kinds of crazy shit.”

That willingness to experiment — Xaphoon’s sleekly danceable tracks cop everything from Tom Waits and Weezer to Radiohead and La Roux — first drew notice when the band’s giddily nostalgic “Opposite of Adults,” built around the unmistakable synth hook from MGMT’s “Kids,” led to accolades on rap blogs and a mess of frat-party bookings. An ensuing mixtape, The Swelly Express, was downloaded more than 100,000 times in two weeks in late 2009. “Kids at schools in Maine or New Hampshire would hear our songs online and ask us to come play,” says Chiddy, still amazed. “We were hopping in a van, and thinking, like, ‘Road trip!’?”

After “Adults” hit the Top 20 on the U.K. singles chart, the road took Chiddy Bang to both Glastonbury and Lollapalooza last summer, as well as on their own headlining campus tour. The duo’s major-label debut, The Preview EP (Virgin/EMI), came out in October and a full-length featuring guest spots from Q-Tip and Pharrell is due in early 2011. Despite their success, the career-minded Xaphoon is making sure to keep his options open. “Whenever I meet a dope producer,” he says, “I’m always thinking, ‘If this all goes away tomorrow, I can at least be his intern.’?”