Breaking Out: Bear in Heaven 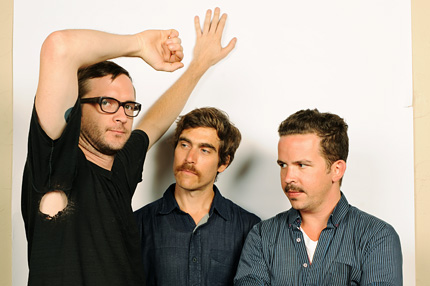 Three years ago Adam Wills was working as a motion graphics artist for a film company and wondering how to kick-start his music career. Looking for some kind of guidance, he contacted a shaman to lead him through a sweat lodge ceremony in upstate New York. “I went two weekends in a row to a teepee, and it was like a one-way ticket through 20 years’ worth of meditation,” he says. “It was really beautiful. Then, a few weeks later, I got fired.”

Which allowed him to focus on a better gig: playing guitar in Brooklyn-based electronic rock trio Bear in Heaven. Originally the solo project of singer/multi-instrumentalist Jon Philpot, who had previously worked in postproduction at an Atlanta film company with Wills, the band released their debut album, Red Bloom of the Boom, in 2007. It was on the sonically adventurous sophomore effort, Beast Rest Forth Mouth (Hometapes), though, where Bear found their sound, as tracks such as the imperiously swooning “Lovesick Teenagers” and seductive, monolithic “Fake Out” showcased a hypnotic blend of mechanically funky rhythms and moody synth melodies.

Together, Wills, 32, Philpot, 36, and drummer Joe Stickney, 31, have seized upon a template equally fit for sporting glory — CBS used the rousing “You Do You” during February’s Super Bowl telecast — and dance-floor hedonism. (First released in late 2009, Beast was reissued in September with an extra disc of rave-ready remixes.) “We love drones,” explains Wills. “Whether you’re listening to Native American peyote songs or krautrock or sacred chants, it’s all very long one-note structures.”

This year they’ve taken those structures on a lengthy headlining tour that will wrap at the end of November. “In Buffalo we had this guy tell us he’d just gotten back from a peacekeeping mission in Iraq,” the guitarist says. “He said he played our CD in his Humvee while driving through these old ruins and bombed-out cities. To think of our music being played halfway around the world is amazing.” Wills pauses to consider his words. “I hope we brought those guys some inner peace.” He ought to know something about that.