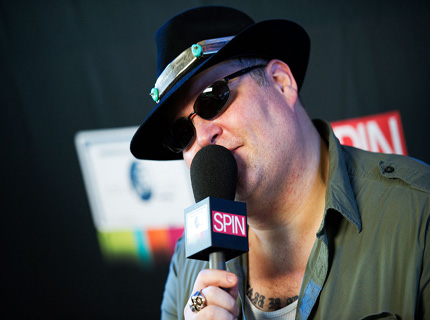 During this weekend’s ACL Music Festival in Austin, TX, artists stopped by the American Express® ZYNC ZONE, to chat with SPIN about their summer festival experiences and much more, among them blues legends Blues Traveler– watch our video interview, plus performance footage below!

Blues Traveler has been rocking for more than two decades and the most recent turn in the band’s life has been the embrace of social media.

“It’s a chance for a dialogue with a faceless crowd,” said frontman John Popper.”I’m a sucker for that, you sort of find out who you are in that dialogue.

In 2012 the band will turn 25 and in January they’ll hit the studio to begin recording a new album due at their quarter century mark, the year will also bring a box-set for the band.

“We’re going to milk the crap out of it,” Popper said.

See our exclusive interview with Blues Traveler below, and click here to check out more interviews from the American Express® ZYNC ZONE!Scalable, non-watermarked