The Black Keys Chat with SPIN at ACL Fest 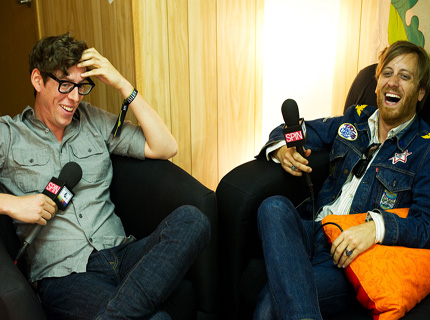 During last weekend’s ACL Music Festival in Austin, TX, artists stopped by the American Express® ZYNC ZONE, to chat with SPIN about their summer festival experiences and much more, among them recent VMA winners The Black Keys– watch our video interview, plus performance footage below!

Coming out of Akron, Ohio Dan Auerbach and Patrick Carney weren’t subjected to much music, and that’s why they love coming to Austin for ACL, all of the music and the “good breakfast tacos” as well, according to Auerbach.

Recently the band just received a MTV VMA and the two bandmates didn’t even watch the broadcast together.

“We watched the VMA’s separately but in the same hotel, but we were texting each other the whole time like, OH MY GOD,” Carney said. He also joked the band is ready for the tidal wave of success this win is going to bring them.

See our exclusive interview with The Black Keys below, and click here to check out more interviews from the American Express® ZYNC ZONE!