Billy Corgan: “I Have More Than Enough Songs” 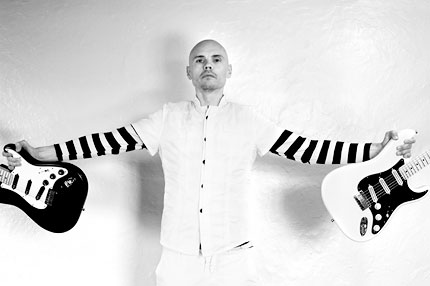 Billy Corgan will release the second installment of his 44-song Teargarden By Kaleidyscope project on November 22 – meaning he’s only got 35 tracks in the ambitious project left to go. But the Smashing Pumpkins leader isn’t worried that he won’t be able write enough material, which he says will take four years.

“I have more than enough songs,” Corgan told Spinner. “I’ll probably write a lot more. It’s such a different project than preparing for a normal album. It’s interesting to write a song and come back to it a year later and have a completely new perspective from whatever you learned in that last year. I’m really enjoying that process.”

Corgan compares the creative process behind Teargarden to the Pumpkins’ 28-track double-disc album Mellon Collie and the Infinite Sadness.

“If I don’t take off a big enough piece to chew on, I’ll get bored,” Corgan said. “I thought, ‘If I really shoot my mouth off here, then I’ll do it.’ The last time I really did that was with the Mellon Collie album in the ’90s. After we had this wave of success with our second album I came out and said, ‘OK, we’re going to do a double CD’ and everyone was like, ‘Are you insane?’ But it really made me commit on a deeper level to my writing, to the project. I looked at this similarly.”

The second installment of Teargarden By Kaleidyscope will feature four songs previously released on the band’s website, plus a new B-side “Cottonwood Symphony.”