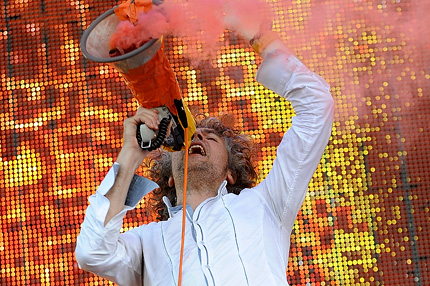 Now in its eighth year, the Austin City Limits festival has worked hard to broaden the city’s laid-back, hippies-and-roots-rockers reputation by booking edgier acts like the Pixies, Massive Attack, the Mars Volta, N.E.R.D., and Queens of the Stone Age. For the 2010 incarnation of the ACL Fest, though, they seemed instead to embrace it — headliners included Phish and the Eagles, respectively, with a Saturday night set from M.I.A. providing one of the few deviations from the rock band-heavy lineup.

This worked in the festival’s favor, for the most part. The consistency and quality of those chosen bands — the Strokes, the Flaming Lips, Sonic Youth, Muse, the National, and Band of Horses all performed — meant that instead of a mishmash of headliners from around the pop spectrum, the cup overflowed for rock fans. Without a see-it-to-say-you-saw-it appearance by, say, Lady Gaga, ACL’s crowd got more and more of what they paid for. There’s something to be said for doubling down on a good thing, and these are the ten best moments we caught at this year’s festival.

BEST HOPE THAT 2011 WILL SOUND LIKE 2001: THE STROKES
Two songs. That’s how long it took for Friday night headliners the Strokes to remind the ACL audience that they were among the first to break ties with the ’90s and usher in a new, exciting decade of rock’n’roll. The one-two punch of “Is This It” and “I Don’t See It That Way” don’t exactly sound like a breath of fresh air anymore — a decade’s worth of bands that followed in the Strokes’ footsteps have ensured that — but they’re as potent and taut as ever. Julian Casablancas, clad once more in his trademark leather jacket and sunglasses (“Like an asshole, I wear sunglasses at night,” he quipped), was affable and awkward throughout the set. The band dropped deep cuts like First Impression of Earth’s “Evening Sun” among hits like that album’s first single, “Juicebox,” and scored an early win with a high-octane rendition of Is This It’s “Someday,” which featured a backdrop of Tetris and Pac-Man projected on the screen. Game over.

BEST BID FOR A HEADLINING SLOT NEXT YEAR: THE GASLIGHT ANTHEM
A lot has been made of how arena-ready New Jersey’s Gaslight Anthem have become, but Saturday’s afternoon ACL set offered the most compelling evidence yet. Carrying a mid-day audience’s attention at a festival this size through opening stompers like “High Lonesome,” “Stay Lucky,” and “Bring It On” is one thing, but getting them to follow on the whispered dynamics of the opening to “The Diamond Church Street Choir” is another. By the end of their set, they looked less like a bunch of Jersey boys who grew up worshipping Springsteen and more like the Boss’ peers, as they effortlessly jumped from triumphant anthems like “American Slang” to the slow-burning rock of “Queen of Lower Chelsea,” and even a lullaby like “Here’s Looking At You, Kid.” Singer Brian Fallon told the audience that it was the band’s first time playing ACL. “Last year, I watched it on TV,” he said. If their next twelve months are as productive as the previous twelve, they’d be a strong candidate for playing near the top of the bill in 2011.

BEST VOICE, HANDS DOWN: LISSIE
Rookie sensation Lissie’s debut album Catching a Tiger combines the Americana-laced sound that her label, Fat Possum, is known for, with an almost Taylor Swift-ian pop-country. Her live show, meanwhile, is further proof that her voice can work in any genre. On the ballad “Everywhere I Go,” her voice was powerful enough to compete — and win — with the sound bleeding over from the African pop sound of the Very Best on the nearby Budweiser Stage. She followed the ballad with “In Sleep,” and the moody pop came off as a victory lap. It was easy to imagine another reality, where her records were produced by, say, Brad Paisley instead of Band of Horses’ Bill Reynolds. Even in that world, she’d be a star in the making.

AWESOMELY NOT A ONE-OFF: BROKEN BELLS
Early on in Broken Bells’ set, the seven-piece band uncorked the Prince-ian single “The Ghost Inside,” and found their groove quickly, cranking up the low-end while singer James Mercer unleashed his falsetto. Throughout the set, the erstwhile Shins frontman demonstrated that same deft songwriting touch that changed Natalie Portman’s life in Garden State as he and partner Danger Mouse excelled on both material from Broken Bells’ self-titled debut, and on alternate tracks, like a stripped down take on the Beatles-esque “Insane Lullaby”, which Mercer sang on the Danger Mouse/Sparklehorse collaboration album Dark Night of the Soul. Bonus: A few new song debuts — both harder-edged and fuller-sounding than the tracks on the band’s initial release — offered exciting evidence that the group isn’t just a one-off.

BEST SUPERGROUP: MONSTERS OF FOLK
When your band’s lineup includes outsized personalities like Conor Oberst (Bright Eyes), Jim James (My Morning Jacket), and M. Ward (She & Him), it doesn’t make sense to ignore each man’s body of work beyond the songs they’ve created under the Monsters of Folk banner. An early highlight during the band’s generous two-hour timeslot on Saturday evening was a hollering take on Oberst’s “Soul Singer in a Session Band, followed by M. Ward’s “Vincent O’Brien” and My Morning Jacket’s “Golden.” Ultimately, though, the whole was greater than the sum of its parts: The scorching “Baby Boomer” found Ward and Oberst deftly trading lines within the verse, while James elevated the chorus with his ethereal vocals. Oberst dedicated “Dear God (Sincerely M.O.F.)” to “one of our favorite bands, the Roots,” who adapted the song into the first single from their recent How I Got Over, and it was a nice gesture, but a verse from Black Thought would have only crowded what was already a stage packed with big-name talent.

BEST ARGUMENT FOR THE CONTINUED PROLIFERATION OF GARAGE ROCK: THE ETTES
The Ettes were one of several garage-y, bluesy stompers on the bill for Friday’s opening festivities, appearing alongside their occasional tourmates and collaborators, the Black Keys, as well as the genre’s most renowned revivalists, the Strokes. But the Ettes’ passionate and energetic set stood out from the pack, in the shady side of Zilker Park, proving that a set on one of the festival’s side-stages could sound just as vital as their big-brother band, who were playing the mammoth AMD Stage on the other side of the park to one of the weekend’s largest crowds.

BEST REASON TO MOURN RONNIE JAMES DIO: THE SWORD
Really, it’d only have been a matter of time before the Sword, who’ve broadened their musical palette from hard-edged thrash metal to psychedelic-tinged, soaring, crescendoed rock, would have found themselves at a festival like ACL and tapped the Holy Diver himself for a guest vocal spot — and it would have been the best moment of everyone’s year. As it was, the irony-free Austin metalheads managed to work even the most mellow of Phish fans and self-conscious of Strokes backers into a mosh pit, with hippies and hipsters alike offering up tributes to the metal overlords.

BEST REASON NOT TO MESS WITH TEXAS: MIDLAKE
While acts with Texas roots dotted the ACL lineup, the epic early Sunday evening set by this seven-piece from the North Texas college town of Denton threatened to top them all. Keen to combine powerhouse, Crazy Horse-style jams on songs that kicked off with dual flute solos, the band showcased a made-in-the-Lonestar State boldness — especially on set closer “Head Home,” which was blown up from its three and a half minute album version to a freaked-out epic jam, with four guitars and two sets of keyboards helping fill the stage with a noise as big as Texas.

BEST ENTRANCE: THE FLAMING LIPS
Even though they’ve been doing it for years, the Flaming Lips’ festival stage entrance never fails to blow minds. In the center of a set covered in orange — orange set-pieces, orange gear, orange-clad roadies and stagehands — an orange ramp appeared, strategically placed near the bottom of the LED-projection of a psychedelic vagina. It was from this opening that a slot (sorry!) opened, and the band members, one by one, wandered down to stage level. Ambient noise built as the band’s high priest, Wayne Coyne, inflated his human-sized “space bubble,” and it reached a crescendo as he rolled into the crowd. Emerging from the bubble, he retrieved a smoke-spewing megaphone to sing Embryonic’s “Worm Mountain” as dancers appeared on either side of the stage, wearing orange outfits and rocking out with the band. As they went into their second number, “Silver Trembling Hands,” Coyne exhorted the audience to scream, offering specific instructions for the kind he wanted (“oww-oww-oww-oww-OWWWWW!”) before climbing onto the shoulders of a guy in a bear suit to sing the song.

BEST DISPLAY OF INTENSITY FROM A GUY DRESSED LIKE DON DRAPER: THE NATIONAL
The National’s Matt Berninger, smartly dressed in a full three-piece suit, looked every inch the dapper gentlemen during the band’s late Sunday evening set. That didn’t stop him from fully unleashing his inner rock and roll animal, however, as he growled through “Afraid of Everyone,” off this year’s High Violet, pounding the mic into his head and lurching his body throughout. The passionate performance continued into “Conversation 16″ as the captivating frontman seemed genuinely moved by his own lyrics, even though he never so much as unbuttoned his vest. It’s rare you see a guy as well-dressed as Berninger positively shriek the opening verse of a song like “Abel,” but he delivered the intensity while looking sharp.

BEST NICE-GUY MOMENT: THE MOUNTAIN GOATS
Even though his Mountain Goats are now a full-fledged band with a permanent lineup, John Darnielle played several songs solo. As he began the live rarity “Source Decay,” he warned that he might forget the words before he got far into the song, and that’s exactly what happened on the second line of the song (which references Austin). He called for help from the early Friday afternoon crowd, to which someone was happy to chime in with the proper line (“I take the detour…”), and Darnelle’s nice-guy charms turned the whole thing into a neat bonding moment — a rarity for a mainstage act at a festival the size of ACL.

BEST MEGA KARAOKE: THE EAGLES
The Eagles are no strangers to playing to massive crowds, but as the sole headliner for the festival’s closing night, the band’s audience stretched a good third of a mile at the start of their set. While many of those in the audience might not have ponied up the cash for a proper Eagles concert, the band’s hits are such rock’n’roll staples that anyone with enough of an interest in music to attend the Austin City Limits Festival should know the words. That was evident as it sure sounded like every single voice in Zilker Park was raised to belt out lines like “Take it / to the limit / one more time” (though the verses were quieter, naturally). The set mixed songs from 2007’s Long Road Out of Eden with the band’s exhaustive back catalog, but when an extended trumpet solo ushered in the opening bars of “Hotel California,” a tens-of-thousands strong karaoke session erupted, and everyone at ACL — hipster, hippie, homeboy, etc. — journeyed down that dark desert highway as one.