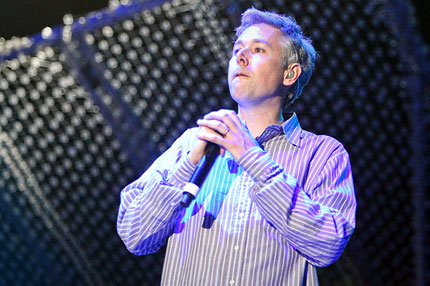 Last week, the Beastie Boys announced plans to shelve the forthcoming Hot Sauce Committee Part 1 in favor of releasing Hot Sauce Committee Part 2. But the Beasties have now had a change of plans: the group has revealed that the songs originally slated for Part 1 will now make-up Part 2, set to come out next Spring, meaning the only difference between Part 1 and Part 2 is the title. Check out the tracklisting, which features collaborations with Nas and Santigold, below.

Adam “MCA” Yauch cleared up any confusion in a statement sent to fans via email. “I know it’s weird and confusing, but at least we can say unequivocally that Hot Sauce Committee Part 2 is coming out on time, which is more than I can say about Part 1, and really is all that matters in the end,” MCA said. “We just kept working and working on various sequences for part 2, and after a year and half of spending days on end in the sequencing room trying out every possible combination, it finally became clear that this was the only way to make it work. Strange but true, the final sequence for Hot Sauce Committee Part 2 works best with all its songs replaced by the 16 tracks we originally had lined up in pretty much the same order we had them in for Hot Sauce Committee Part 1. So we’ve come full circle.”