Band responds to one disgruntled fan's campaign to make the band disappear. 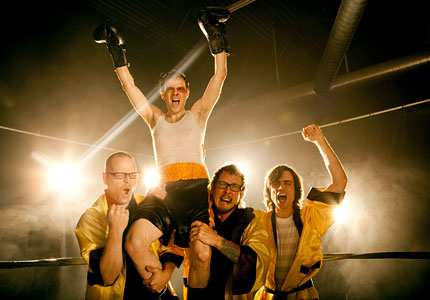 For most Weezer fans, these are exciting times: The band’s dropped a new album, Hurley,teamed up with the Jackass crew, partied with My Chemical Romance, and are bringing their most beloved albums — “The Blue Album” and Pinkerton — to the stage for several sure-to-be-epic fall shows.

But not everyone is psyched about all this Weezer-ness — and one man is doing whatever it takes to make them go away. Seattle local James Burns is rallying a campaign to pay the band $10 million to “disappear.” As The Stranger reports, Burns has set up a page via fundraising site the Point to collect money to “stop hearing about a shitty new Weezer album every goddamn year.”

“This is an abusive relationship, and it needs to stop now,” Burns writes, referring to his disappointment with songs like “Beverly Hills” and “I’m Your Daddy.”

Despite Burns’ proactive rallying, don’t expect Weezer to call it quits. So far, Burns has only raised $172, although one philanthropist has pledged $100.

Weezer seem amused by the campaign. Drummer Patrick Wilson posted on his Twitter last night, “If they can make it 20 [million], we’ll do the ‘deluxe breakup!'”