The New York label celebrates turning 21 with an action-packed weekend of old friends, new faces, and one awkward goodbye 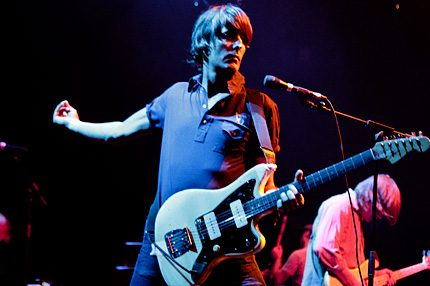 It was somehow fitting that the Matador at 21 Lost Weekend at the Palms in Las Vegas coincided with an appearance by renowned DJ Pauly D and his camera crew — after two decades of thriving just to the side of popular culture, why wouldn’t the label do the same at its own 21st birthday party?

Like the anniversary bashes Sub Pop and Merge threw for themselves in the past couple years, the event saw beloved dormant acts coming out of retirement for one last job (Chavez, mid-’90s vintage Guided By Voices, Come) alongside incoming freshmen (Harlem, Perfume Genius and Esben and the Witch, who won’t even release their Matador debut until next year) reliable mainstays (Yo La Tengo, Cat Power, New Pornographers) and alumni(Spoon, Superchunk). Somehow, losing a chunk of rent money at blackjack doesn’t hurt as much when “Bulldog Skin” comes on the casino’s PA system.

Here are some of the weekend’s notable moments:

Most fitting farewell: Pavement
Pavement’s final U.S. show served to remind why they stopped playing together 13 years ago. On their heels from the outset thanks to some drum-kit and sound issues, the band quickly devolved into the fractious ciphers we remembered them as before they confused everyone by turning pro this year and delivering consistent, coherent sets full of songs we’d never thought we would hear live again, and to completion. Interpreting body language isn’t an exact science, but still: There’s Stephen Malkmus angled awkwardly stage right so as to keep his back to his bandmates. There’s Malkmus on the floor kicking his legs in the air and basically sitting out Spiral Stairs’ vocal turn on “Kennel District” like an inconsolable infant. There’s a clearly furious Spiral stabbing his amp with his guitar and pleading for his bandmates to just get through this one show. And, finally, there goes Pavement. Say goodnight to the last psychedelic band from Stockton, CA. ‘Cause I wouldn’t pencil these fellas in for the Matador At 25 We Can Rent a Car Now! show.

Most grateful: Ted Leo
Ted Leo has only been on Matador for one album (this year’s awesome, slept-on The Brutalist Bricks), but he may have been the busiest man in Las Vegas. Friday night, his band, the Pharmacists, and Fucked Up hosted a head-to-head afterparty set, sharing a stage and alternating songs, which turned into an all-star punk-rock karaoke blowout. With all due respect to Fucked Up’s geeked-out covers of “Breed” and “That’s When I Reach for My Revolver,” and “Precision Auto,” Leo may have stolen the night with a solo acoustic tear through Liz Phair’s “Fuck and Run” and his impressive guitar-playing-while-crowd-surfing skillz. (He reprised the “Fuck and Run” performance Sunday night with Phair during her set.) Leo’s never been shy about his struggles to get by in today’s music business as a principled punk-rocker of a certain age, and an earnest toast to his new benefactors during his show was capped by a cover of Nick Lowe’s “I Love My Label” with an assist from Carl Newman.

Most awesome dad: Fucked Up’s Damian Abraham
Sweaty teddy bear of a punk frontman, Fucked Up’s Damian Abraham, was barely seen all weekend without his 17-month-old son Holden, including during his band’s show. Sporting headphones and a pacifier, Holden sat on his dad’s shoulder during “No Epiphany,” which is coincidentally when everyone in the venue got something in their eye. Pollen season!

Most improved: Liz Phair and Cat Power
Wasn’t too long ago that you couldn’t avoid describing a Liz Phair or Cat Power show without using the word “uncomfortable.” The former seemed totally at ease playing a stripped-down set that included “Supernova” and “Divorce Song” and “Stratford-On-Guy.” (For all the praise heaped, deservedly, on Exile In Guyville, when will Whip-Smart get its due?) Meanwhile, Chan Marshall has gone from rarely being able to finish a set intact to strutting around a stage smiling. Too bad the songs get a little snoozy and samey and too devoid of Cat Power’s Moon Pix goodness.

Most distinguished alumni and oldest new kids: Superchunk, Spoon, Sonic Youth
Superchunk and Spoon were on Matador for brief but critical periods, early in their careers, and not necessarily during the records they’re most known for. But they’re as much a part of the label’s history and trajectory as the label is theirs, and both bands delivered sets heavy on era-appropriate classics from No Pocky for Kitty and Telephono, respectively, with smatterings of new stuff. (Bonus points to Spoon for their cover of “No Time,” marking the only instance that the late Matador artist Jay Reatard’s name was mentioned onstage all weekend.) Conversely, Sonic Youth, who just signed to Matador before their last album, The Eternal, didn’t play anything newer than 1994’s “Bull in the Heather,” and even left out “Teenage Riot” to make room for Evol and Sister tracks like “Schizophrenia.”

Most surprising haircut: Girls
Girls’ Christopher Owens has lost his flowing tresses, but pretty much everything else about the band has grown since last year’s Matador debut, Album. The new songs seem even sadder and spacier and Orbisonnier, which isn’t really a word but should be. Most of Girls’ fellow freshmen played the ballroom next door to the Pearl Theater, including Kurt Vile and Harlem and Dead Meadow, ensuring that there was always something loud to do at three in the morning.

Most jock-like: Belle and Sebastian
Belle and Sebastian’s relentless bounciness and…cuteness…isn’t necessarily the most obvious fit with a lot of the bill’s more angular acts, but they’re hard not to enjoy, especially when frontman Stuart Murdoch fires off plastic footballs into the crowd as souvenirs and pines for a t-shirt cannon. He knew the Matador crowd wouldn’t be much for dancing — we’re more like vigorous head-nodders — but brought some fans onstage anyway, for “The Boy With the Arab Strap,” kind of like a Stooges finale only with more crying and hugging.

Just the most: Chavez
They only lasted two albums, but Chavez remain one of the most beloved bands on Matador’s roster. They’ve only played a handful of times since 1996, and they’re so low-profile that guitarist Clay Tarver said his own kids had no idea he’d ever played in a band. Bassist Scott Marshall (son of director Garry Marshall, IN ATTENDANCE) added to the time-warp vibe by wearing the same white jeans and t-shirt he wore in the “Unreal Is Here” video – come on, about 23 other people in the world, you know what I’m talking about. If any band in 2010 released one song as amazing as “Pentagram Ring” or “Nailed to the Blank Spot” or “New Room,” the Internet would explode. I’d go on, but half the band is actually sitting behind me on the plane as I type this and it’s starting to feel awkward.