Check out high-definition live footage of the Radiohead frontman's side project with Flea. 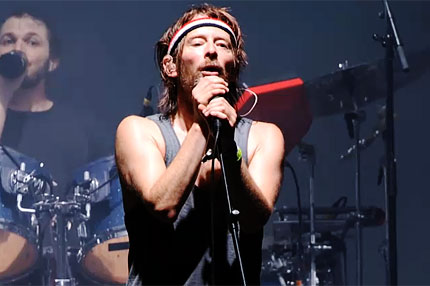 Thom Yorke brought his star-studded side project Atoms for Peace to the states for a brief tour in April last year. Missed out? Some stunning high-definition footage of his new band, featuring Flea, has just hit the web.

In the three clips — shot at Japan’s Fuji Rock Festival last month — Atoms for Peace tear through get their electro-funk groove on with “Feeling Pulled Apart by Horses,” lay out a cool, avant-garde jam with “Paperbag Writer” and dip into some tribal beat trickery with “And It Rained Last Night.”

Bonus: See Thom Yorke wiggle around the stage doing the hippie-noodle dance! Check out the clips below.

Don’t expect Atoms for Peace to return anytime soon. As SPIN previously reported, Radiohead are gearing up for a new record, according to bassist Colin Greenwood. “[We’ve] just finished another group of songs and have begun to wonder how to release them in a digital landscape that’s changed again,” he wrote in a U.K. article.

What do you think of these Atoms for Peace videos? Sound off in the comments.

“And It Rained All Night / Cymbal Rush”