WATCH: In the Studio with Phoenix!

Go behind the scenes of the French pop group's 2009 breakout Wolfgang Amadeus Phoenix. 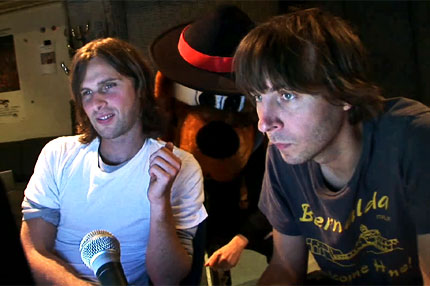 Phoenix’s Grammy-winning 2009 breakout Wolfgang Amadeus Phoenix is one of the most acclaimed and talked-about releases in recent years — and now you can see how it was made!

The French popsters are rolling out a nine-part video series on YouTube that provides an inside look at the album that was painstakingly recorded over a year and a half. Each weekday through October 7, the band will release two videos for each track on the record (“Love Like a Sunset Part I” & “II” are presumably combined) — one with commentary from the band, and a second with commentary from producer Philippe Zdar (Cut Copy, Chromeo). Watch the first and second installments for “Lisztomania” and “1901” below.

The clips show the boys working hard in the studio, charting songs on a marker board and recording demos into hand-held Dictaphones, as overdubbed audio explains the recording process for the catchy pop singles. “When we finished the track, it was obvious it was going to open the album,” the band says of “Lisztomania.” “Our year and a half of work is summed up in the beginning of this song.”

Watch the videos below, then tell us what you think in the comment section.