"I wanted to sound like America -- big skies and big hearts," Gary Lightbody tells SPIN of the band's debut album. 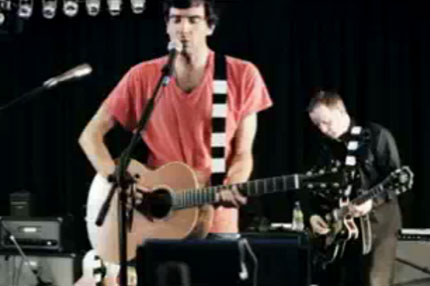 Gary Lightbody is the frontman for Scot balladeers Snow Patrol, but with Tired Pony, his new group featuring R.E.M.’s Peter Buck, Belle and Sebastian’s Richard Colburn, and producer Jacknife Lee, among others, he has an all-new sound: country-tinged American roots music. Watch an exclusive video performance of “Get On the Road” below!

On The Place We Ran From, the band’s debut out September 28, the moody acoustic ballad features a vocal take from She & Him’s Zooey Deschanel (M. Ward and Editors’ Tom Smith also contribute to the album). But in this performance, recorded at a London studio, Lightbody sings both parts himself, crooning about heartbreak and highways.

“The album is defined in a way by getting on the road,” Lightbody tells SPIN.com. “Bonnie and Clyde haunt the record… two people versus the wide American highway.”

Lightbody, who says he grew up listening to country artists like Conway Twitty, Merle Haggard, Willie Nelson, and Tammy Wynette, adds that the music for “Get On the Road” was written during some down time while rehearsing with Snow Patrol. The lyrics, however, were penned in Portland, OR, where the band — many of the members old friends — recorded their album in one whirlwind week.

“As with the rest of the songs, I wanted ‘Get On the Road’ all to sound like America — big skies and big hearts,” explains Lightbody. “It’s just sometimes those skies are full of thunder and the hearts are broken.”

Watch Tired Pony’s performance of “Get On the Road” below, then sound off in the comment section.

Tired Pony, “Get On the Road”