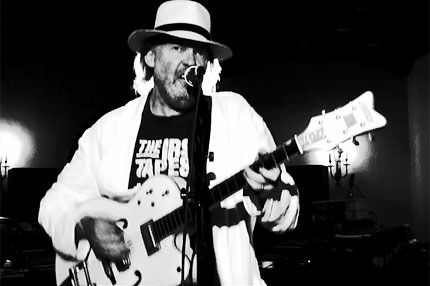 Neil Young’s new album, Le Noise, is his best effort in nearly a decade, and now he’s released Le Noise: The Film, a riveting, 38-minute mini-movie featuring live-in-studio performances of each of the album’s eight tracks. Watch it below!

The film is shot in striking black and white. Captured in producer Daniel Lanois’ home studio in Silverlake, CA, each of the clips find Young stripped down to his songwriting core as a solo artist, with filmmaker Adam CK Vollick’s cinematography depicting Young as both an imposing rock legend and a vulnerable artist.

The starkness of the video also mirrors the no-frills approach of Le Noise, which is built around little else but Young’s voice and his reverb drenched guitars. As Lanois puts it, it’s just “a man on a stool.”