Pop star speaks out against "Don't Ask, Don't Tell" at a rally in Portland, Maine. 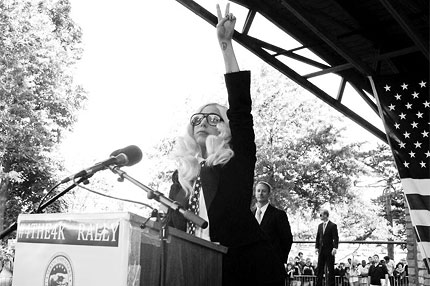 Lady Gaga spoke out at a rally in Portland, Maine yesterday afternoon, urging the state to repeal the “Don’t Ask, Don’t Tell” policy. The State Senate is voting to repeal the 17-year-old policy today, which allows gays to serve in the military provided they do not disclose their orientation.

Gaga, whose long blond wig and oversized spectacles made her look like a bizarro J Mascis of Dinosaur Jr., spoke passionately to the crowd: “Equality is the prime rib of America, but because I’m gay, I don’t get to enjoy the greatest cut of meat my country has to offer!” Check out video from the rally below.

Gaga also proposed an alternative to “Don’t Ask, Don’t Tell,” which she dubbed “If you don’t like it, go home.” “It sends home the soldier that fights for some freedoms ands some equality, but not for the gays,” she explained.

In recent weeks, Gaga has spoken out publicly about her stance against “Don’t Ask, Don’t Tell.” At the MTV VMAs last week, she appeared at the show with discharged gay and lesbian members of the military and later posted a seven-minute video message on YouTube, where she called the law unconstitutional.

Most provocatively, Gaga took to Twitter and rallied her fans to encourage Senate majority leader Harry Reid to schedule a U.S. Senate vote for its repeal. Reid surprisingly Tweeted back to Gaga: “Anyone qualified to serve this country should be allowed to do so,” he wrote.

What do you think about Gaga’s stance on “Don’t Ask, Don’t Tell”? Sound off in the comments section.