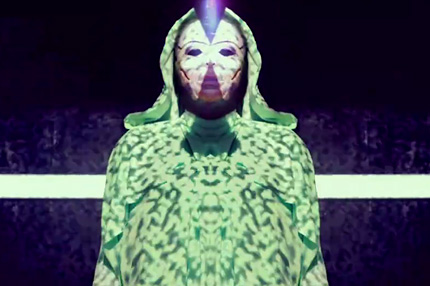 Jimmy Eat World have earned a reputation as earnest emo-rockers, but in their new video for “My Best Theory” (from their new album Invented, out Sept. 28) the Arizona quartet prove they’ve got a dark, awesomely deranged side as well. Check it out below!

In the clip, two masked females (whose costumes recall Stanley Kubrick’s Eyes Wide Shut) are enslaved by three laser gun-toting, duck-billed robots — but they soon make their escape! The girls are chased through the woods and some hot Sapphic action may or may not take place — you’ll need to use your imagination — before they’re discovered (and exterminated) by the ‘bots.

Jimmy Eat World are currently on the road in support of their new album. Read SPIN’s report from their opening date in Atlanta here.