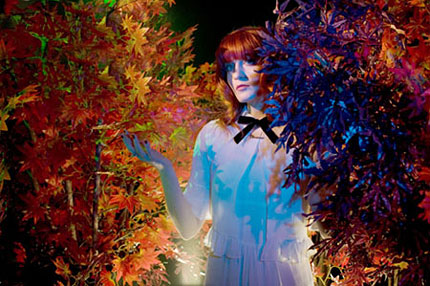 Fresh off delivering one of the best performances of the VMAs last night – plus picking up an award for Best Art Direction for the video to “Dog Days Are Over” – Florence Welch of Florence and the Machine has unveiled a new clip for her song “Heavy in Your Arms.”

Welch filmed the clip to promote her contribution to the Twilight Saga: Eclipse soundtrack, but there’s no trace of Bella or Edward here. Instead, “Heavy in Your Arms” is an awesomely gritty black-and-white video, mixing lo-fi Blair With Project-style production with elaborate, Victorian-era costumes that are straight out of a Kate Bush video. Plus: Florence gets dragged around the forest floor by some mysterious dude in a black suit. Sweet! Check out the moody gothic awesomeness below.

WATCH: Florence and the Machine, “Heavy in Your Arms”

Kevin O'Donnell
Tags: Florence and the Machine, the wire, Videos