The Killers frontman drops a synthy version of "Are You Lonesome Tonight" during solo gig. 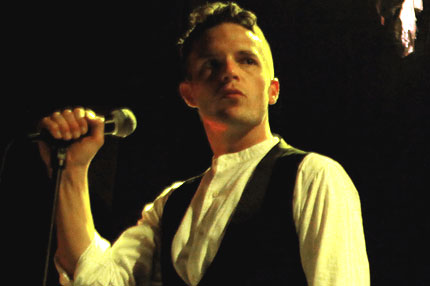 Elvis Presley was no stranger to Las Vegas. And Vegas native Brandon Flowers did the King proud last night at his London solo gig, taking a break from playing songs off his just released Sin City homage Flamingo to cover “Are You Lonesome Tonight,” Presley’s 1960 hit. Watch video below.

Backed only by a swell of synthesizers, the Killers frontman earnestly crooned the first few verses of the classic ballad, and while it can’t touch the King’s original (the performance from his 1968 comeback special is a must-see — watch it here), it was a swell tribute to the musical icon who spent his later years performing in Vegas.

After the two-minute Elvis teaser, Flowers and his band launched into the Killers’ “Losing Touch,” off of 2008’s Day & Age. Flowers also covered Kim Carnes’ 1981 No. 1 single “Bette Davis Eyes” at the London gig, NME reports.

Flowers made his U.S. live solo debut in August (read SPIN’s review), and Flamingo hits stores on Sept. 14. Listen to preview clips of every song on the album here.

What do you think of Flowers’ Elvis homage? Watch the video then sound off in the comments below.