The energetic frontman makes his Broadway debut in American Idiot. 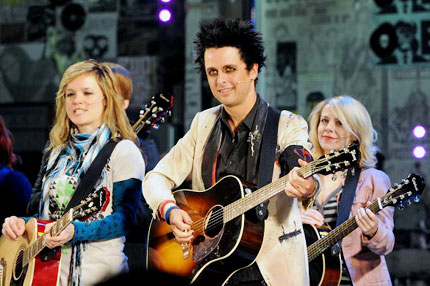 Frontman Billie Joe Armstrong made his acting debut at the show, playing the role of St. Jimmy in the Tony Award-winning adaptation of the punk band’s namesake 2004 album. Watch video of his performance below!

Tuesday’s show was the first in an eight-night run for Armstrong, who is filling in for actor Tony Vincent, who is on a leave of absence due to a personal family matter. In the role of the drug-dealing St. Jimmy, a central character in the musical Armstrong co-wrote the musical with Spring Awakening’s Michael Mayer, the high energy frontman led the cast in Green Day classics, including Idiot jam “She’s a Rebel” and a show-closing rendition of acoustic ballad “Good Riddance (Time of Your Life).”

SPIN reviewed the Broadway debut of American Idiot back in April, writing that it “loosely chronicles [five] characters’ various destinies in a post-9/11 society: love, pregnancy, drug addiction, and the war in the Middle East.” With overzealous choreography and live performances of songs, the musical “feels like a real rock show that just happened to take place in a Broadway theater.” Read our full review here.

Watch video of Billie Joe’s Broadway debut in American Idiot below, then sound off in the comment section.