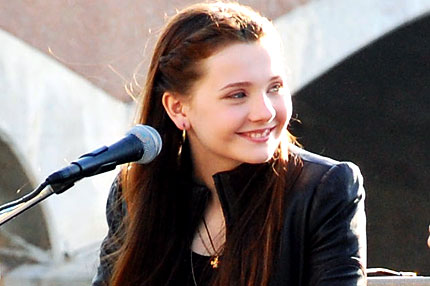 While in Toronto for last week’s film festival, Abigail Breslin got up in front of the audience at the Horshoe Tavern. But the 14-year-old actress wasn’t recreating her adorable performance of “Super Freak” from her breakout role in Little Miss Sunshine. Breslin was unveiling a song from her upcoming movie Janie Jones, in which she plays the daughter of a drug-addled rock star. Check out exclusive footage of her performance, accompanied by Gemma Hayes, plus SPIN’s Q&A with Breslin, below.

The title Janie Jones suggests Breslin’s role might relate to the controversy-courting songstress memorialized the Clash song of the same name. And while that’s not the case, Breslin does admit that filming the role was a little dangerous: “I learned to play a little guitar and it’s really hard because your fingers bleed,” she says. “And it’s scary to get on stage in front of people. I have a new respect for musicians.”

Shortly after her first live performance, SPIN caught up with the actress to talk about her musical ambitions, the first album she ever bought and who she’d like to portray in a rock biopic.

What was the first album you ever bought?
When I was three or four, I was obsessed with the animated movie Quest For Camelot. I went to the mall and got the cassette tape to play in our car.

A cassette tape in 2000? You must have been old school.
It was an old car. Now nobody in my family even buys CDs.

If you were hosting SNL, who would you want as the musical guest?
Umm, I love so many people. Regina Spektor, She & Him, or Peter Bjorn and John. My brother is taking care of introducing me to music.He’s 18 and he’s in a band.

Clem Snide’s Eef Barzelay did the score for Janie Jones. Had you heard of the band before you took the role?
I had not, but their music is really cool.

Name a playlist on your iPod.
Well, I never name them, so there’s On-the-Go 62. That’s Glee music. It’s great for running at the gym.

Who would you like to see on Glee?
I’ve been waiting for them to do a Taylor Swift episode. Or the Rolling Stones.

Do you have Bieber fever?
No, no. I just went to the doctor and they said I was very healthy.

What’s a song you’ve listened to in the past 24 hours?
“These Days” by Nico. I don’t know why I was listening to such a depressing song.

If you were to star in a rock biopic, who would you want to portray?
Stevie Nicks. I love “Rhiannon.”

Who’s your favorite rapper?
I don’t know, but I do love that Rihanna and Eminem song [“Love the Way You Lie”].

Are you allowed to listen to Lady Gaga?
Yes. There are certain people my parents don’t like but they don’t really care if I listen to it. Unless it’s like horribly disgusting or something like that.

Should we be expecting an album from you in the near future?
Not right now. Acting is my main thing. Singing is just for fun. But who knows?Maybe someday.