When defining the “Song of the Summer,” people often refer to the so-called “undeniable” track that at first seems utterly loathsome, but after it’s been blasted into the cosmos 10,000 times, we’re all supposed to happily recline on our metaphorical beach blankets and submit to being ravaged, again and again and again. This is the Stockholm Syndrome theory of pop, the idea the radio is still some kind of useful monoculture adjudicator that permits us all to commune as a nation by being held captive like delirious 10-year-olds at a little-monster pool party.

But what about escaping from all that captivity?

These days, most of us create our own playlists, switching from the radio (commercial or satellite or Internet) to iPods to other listening gizmos, and as a result, the variety of songs emanating from our vehicles (or bedrooms or headphones) is far greater than before, though for some reason overly customized SUVs do tend to crank Drake’s “Find Your Love.” So as the season ends, SPIN’s list of 2010’s Best Summer Songs is not a survey of the undeniable (sorry Taio Cruz). It’s a mixed bag of what we embraced, willingly, without being subjected to excessive force.

Start our countdown below: 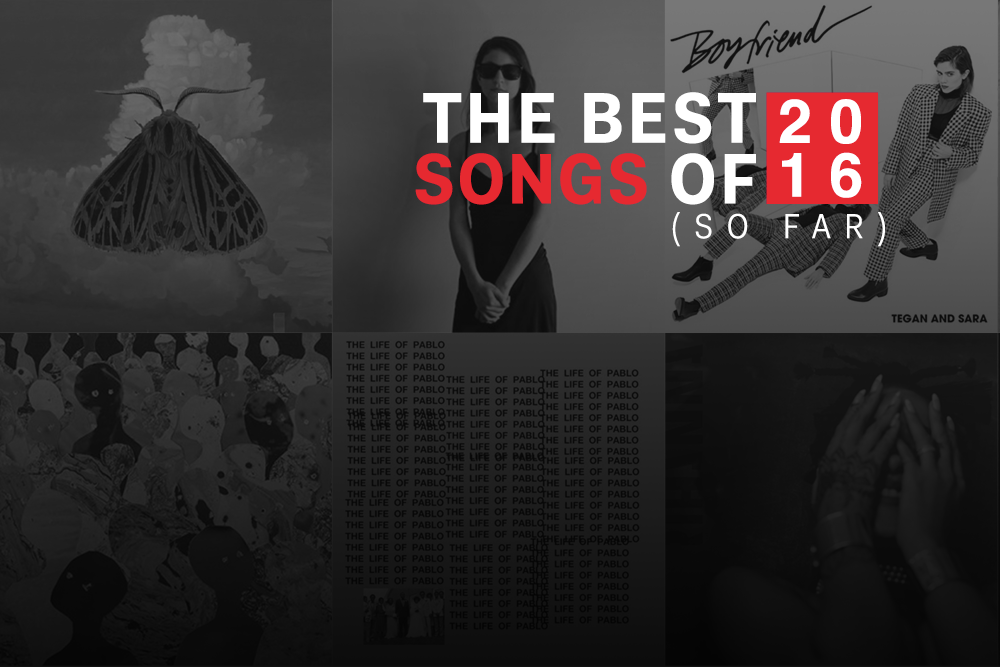 Les Savy Fav, “Let’s Get Out of Here”
The ideal ooh ooh anthem for getting in your busted-ass, registered-out-of-state car and speeding far away from the urban boho clusterblog that dutiful bands like Les Savy Fav have attempted to rock during the past decade, despite the endless barrage of ’80s kitsch, tragic synths, ironic headbands, and you’ll-work-for-me-one-day boat shoes.

Snoop Dogg feat. Kid Cudi, “That Tree”
“That Tree,” huh? Considering these doobie bros’ historic inhalation rate, this one’s gotta be about blazin’ up, right? And when Snoop jabberwocks over Diplo’s stuttering EKG beat, it’s, like, pass the kush, bro-dogg. But then, “little buddy” Cudi croons the organ-pumping, gently swaying chorus, which remarkably turns out to make one of the most heartfelt cases for family over hoes to ever grace a summer jam. Go figure.

Das Racist, “You Oughta Know”
Riffing off Billy Joel’s ’70s-pop cacciatore “Movin’ Out (Anthony’s Song)”-as well as Dipset’s similar mixtape sample-the absurdist Brooklyn rap duo go full-bore Cheech and Chong ROTFLMAO, updating the timeless advice, “You should never argue with a crazy ma-ma-ma-ma-man,” to apply to that all-too-familiar plague of “white dudes on the Internet.” Their sun-is-shinin’ axiom: “A rich interior world is a joy to own.” Palabra.

The Black Keys, “Tighten Up”
The Keys’ breakthrough single has a remarkable lightness of step, as if the bloozy wails and guitar flares just blithely sauntered over and pulled up a chair, inviting you to whistle along. So you did, grinning like a guileless goof. Then you might’ve noticed how drummer Patrick Carney’s syncopated byplay was on some Art Blakey shit.

Robyn, “Dancing on My Own”
Most people go to clubs to forget about the jerks and tricks who’ve sabotaged their lives and trashed their hearts, so it takes a special artist-like this ageless Swedish disco imp-to transform that despair into pounding dancefloor redemption that doesn’t feel ridiculously tawdry. When Austrian mash-up mook DJ Schmolli invites AC/DC to crash the party, he archly keeps the festivities going in the parking lot.

Best Coast, “Our Deal”
Best Coast’s Beth Cosentino and Wavves’ Nathan Williams are the Tammy Wynette and George Jones of beach-slumming indie pop, an adorably volatile couple who prefer kind bud over nasty painkillers and spiteful vodka. Here, our heroine swoons in a twangy echo chamber of young love that dare not text or IM or Tweet its name.

Wavves, “King of the Beach”
“King of the Beach,” mmm? Despite repeatedly shouting “you’re never gonna stop me!” the aforementioned Mr. Williams is ruler of the coast like the aforementioned Mr. Jones was the lord of the highway when he drove his John Deere lawnmower down to the liquor store because his wife had hidden the car keys. But it’s a refreshing kick to watch Wavves bash around in the sand, as if they’re playing their instruments with plastic shovels, keeping Jay Reatard’s bratty bonfire flickering.

The-Dream feat. T.I., “Make Up Bag”
Love King is a hilariously banal ickfest, but this hip-dipping walk of shame is marvelously wrought, with the The-Dream’s squeeze cussing him out in her panties (“Sorry don’t get it / So sorry can’t hit it”) while he scrambles to purchase forgiveness with the proper designer edition of the titular item in question. T.I., of course, admits nothing; he just bestows the Chanel and Marc Jacobs because “all I do for you is just a part of me doin’ me.”

Big Boi feat. Cutty, “Shutterbugg”
Big Boi’s sparkling solo album hasn’t diminished the desire for an OutKast reunion, but it’s certainly helped General Patton further establish the civilian respect he deserves. Coproduced by a reanimated Scott Storch, “Shutterbugg” cut through the season’s suffocating humidity with a chilly electro prowl. And as a quirky bonus, Big Boi dissects the Mexican drug trade: “Across the border the eses are gettin’ smarter / They got flour for tortillas and lettuce for enchiladas / If you follow / Wink wink, no doubt, we don’t speak / In a blink, those folks could have you sleeping in the clink.”

Dom, “Living in America”
Lo-fi indie rock’s smartest aleck swirls up a soft-serve synth ode to degenerate homegrown liberation-“Babes on the beaches / Baby G’s in the city / American mummies teach the world to be pretty / Honeys goin’ shopping / All the bums gettin’ shitty / Come and sing it with me / Baby / It’s so sexy living in America.” Questions?

Janelle Monae feat. Big Boi, “Tightrope”
Respect to Sharon Jones and the extended Dap Kings brood, but with “Tightrope,” Monae became the true heir to James Brown’s ministry of the new super heavy funk-wailin’ and slip-slidin’ with staggering precision, but also flexing a genuinely loony mania to entertain us within an inch of our lives. And when Big Boi raps, “We gonna get back up like the Dow Jones and NASDAQ / Sorta like a thong in a ass crack,” the song’scommitment to keeping your balance and composure under duress reads like a prescription for our seemingly neverending recessionary vertigo.

Katy Perry feat. Snoop Dogg, “California Gurls”
Nobody in pop music, at least in the past five years, has created a more exhilarating tickertape parade out of young women’s sexual coming of age than producer Dr. Luke-Avril Lavigne’s “Girlfriend,” Katy Perry’s “I Kissed a Girl,” Miley Cyrus’ “Party in the U.S.A.,” etc. (Of course, the rite of passage hawked by these skanktastic blank slates invariably equates freedom with whoredom, but hey, it’s sexy to be living in America, am I right?!) That said, “California Gurls” is Luke’s masterpiece, an effortless chord-progression come-on that gives Ke$ha’s “Tik Tok” a candy-coated swoosh. As for Katy Palin, she shoots whipped cream out of her push-up bra like a champ. Meanwhile, Chiddy Bang’s remix ingeniously foregrounds Snoop Dogg incanting “All that ass!” Undeniable? Okay, maybe.

Arcade Fire, “Ready to Start”
When you’re trapped in stay-cation purgatory, sometimes you need a ride. And after generously keeping the car running a few years back, Arcade Fire are all gassed up again, guitars humming, impervious to vampiric businessmen and know-it-all art-school kids, fully prepared to be completely wrong. Do the wave and whoa-oh to “Wake Up” all you want, but this teeth-gritted, coolly thrashing manifesto is their consummate call-up.

Cee-Lo Green, “Fuck You”
If ever there was a fuck-you summer, this was it-cataclysmic weather, economic catastrophe, oil spills, Glenn Beck. And here’s the perfect viral rejoinder, hidden inside a love-struck, neo-soul singalong, falsetto-voiced by a devilishly grinning, foul-mouthed gnome. To quote the Cheshire Cat himsel chopping it up in Wonderland for Alice: “Most everyone’s mad here. You may have noticed that I’m not all there myself.”

Kanye West, “Mama’s Boyfriend” (Live at Facebook)
Far more than the official finished new tracks (“See Me Now,” “Power,” “Monster”) or his Twitter barrage, this raw, verge-of-tears, a cappella performance on a conference table at the Facebook offices finally gave us hope that Kanye hadn’t gone down the egotrippin’ rabbit hole forever. Filled with rage, introspection, self-awareness, and vivid lyrical detail, it was a powerfully moving dissertation on mothers and fathers and sons.

LCD Soundsystem, “All I Want”
“Drunk Girls” was supposed to be the dumb fun summer song that took eye-rolling hipster hedonism to an outlet mall near you; less said about that the better. But “All I Want” is the kind of epically poignant cry for help that leaves you weeping behind your shades at stoplights, a glam/synth/rock meditation on the dog, the girl, and the future, inspired by David Bowie’s “Heroes,” which, frankly, was ditzily optimistic by comparison.

Nicki Minaj, “Your Love”
After playing the delightfully unhinged dinner guest on virtually every other hip-hop/R&B rom-com of the year, Nicki Minaj had her own pop-crossover turn, Auto-Tune cooing in a cuddlier, but no less distinctive, guise (assisted by a sample of Annie Lennox’s “No More ‘I Love You’s”). When she intentionally misenunciated the line, “You’re like a candy store / And I’m a todd-loor,” it was the sort of attention to kooky detail that makes her so irresistible. And the accompanying kabuki video was the most visually breathtaking hip-hop setpiece since Missy’s “Get Ur Freak On.”

J Biebz, “U Smile 800% Slower”
When Tampa, Florida’s Shamantis, a.k.a. Nick Pittsinger, used the audio application PaulStretch to decelerate Justin Bieber’s peppy trifle “U Smile” into a 30-plus-minute ocean of theosophy, he couldn’t have known that he was revealing why pop music conceals the mysteries that unlock the universe and why we need to immediately put the brakes on the entire enterprise-literally-before we diddle ourselves into oblivion.

Gucci Mane, “Lemonade”
Yeah, it’s been out since way back when, but that chattering piano and little-kid chorus and deluge of yellow-feverish metaphors made “Lemonade” the most dizzyingly blissful four minutes of the season. A mushmouth ex-con who rhymes about drugs and drank and sex and crime and jewels with an endlessly permutating array of slang that’s probably got Wu-Tang hitting rewind and Googling, Gucci Mane has that flair for mischievous inflection that all exceptional rappers possess, and he can crack up a room by simply hooting his name-“GOO-CHEE!“-like an owl on its seventh Patron. “Lemonade” has inspired an impressive variety of versions, from Beach House’s cover to Major Lazer’s mash-up with La Roux, and though the song’s worldview is basically color-coded amoral nonsense, it’s still got a timeless message…well, actually it doesn’t, but maybe that’s this summer’s most appropriate message of all.