The band has teamed up with producer Jacknife Lee for latest album, set for release next Spring. 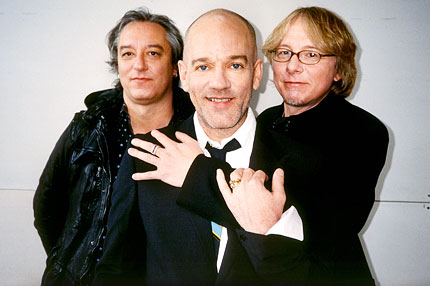 R.E.M. have just wrapped recording of their 15th album, which they’re planning to release next Spring. The band has teamed up with producer Jacknife Lee (U2, Bloc Party, Snow Patrol), who also produced the band’s 2008 LP Accelerate.

R.E.M. look like they’re going big for their new album. Michael Stipe, guitarist Peter Buck, and bassist Mike Mills have been holed up in studios in Nashville, and at Berlin’s Music Shed, where U2 recorded their 1991 masterpiece Achtung Baby (which recently topped SPIN’s list of the 125 Best Albums of the Past 25 Years).

Before returning with his main band, Buck is keeping his focus on his rootsy side-project Tired Pony, his supergroup with Lee, Snow Patrol’s Gary Lightbody, and Belle and Sebastian’s Richard Colburn. Check out an exclusive performance video of the band’s “Get on the Road” here.