The Queens of the Stone Age guitarist talks about the tragic circumstances surrounding the record. 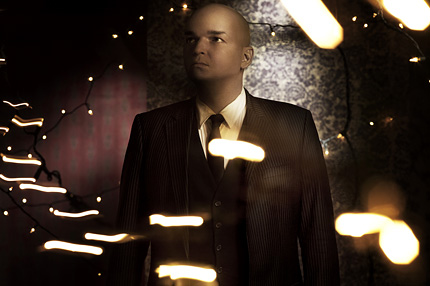 Last November, Queens of the Stone Age guitarist Alain Johannes had wrapped up touring with Josh Homme’s supergroup Them Crooked Vultures when he headed into the studio to record some new music. Johanes was finally ready to address a tragic subject that’d been weighing on him for two years: the death of his wife and musical collaborator Natasha Shneider, who passed away from cancer in July, 2008. “I went into the control room, grabbed microphones and a harmonium and some percussion things, a random sampling of instruments, and just went to work,” he tells SPIN.com. “I was in a trance for four days.”

Johannes is finally revealing the results of those sessions on his debut album Spark and the result is one of the most deeply-felt and confessional albums of the year. Hear an exclusive stream of lead track “Return to You” below. Johannes is releasing the album on October 5 through Rekords Rekords, the newly revived imprint run by Homme. “It really jaw-dropped me because I’ve never heard anyone sing and play like that,” Homme says of first hearing the album.

While Johannes’ tunes address a heavy subject, the record crackles with energy and life — especially the upbeat, rootsy “Return to You,” which is centered around Johannes’ vigorous performance on cigar box guitar. Johannes says that energy was inspired by Shneider. “She had this unbelievable shorthand and speed in creating music on the spot,” he explains. “Her presence is really strong.”

Homme agrees: “I got into music to make art and be around artists that create music that will make you a better person. This record is definitely that.”

LISTEN: Alain Johannes, “Return to You”

Florence + the Machine, My Morning Jacket Cover Eagles of Death Metal’s ‘I Love You All the Time’ for Charity