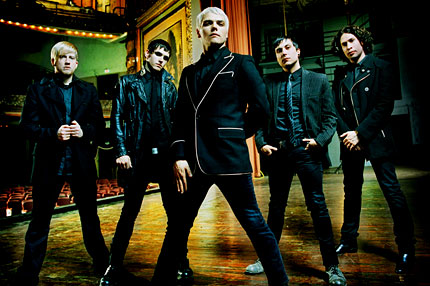 Four years after releasing The Black Parade, My Chemical Romance will finally return this fall with a new album titled Danger Days: the True Lives of the Fabulous Killjoys. According to MTV, the album will be helmed by Parade producer Rob Cavallo and while a release date is still up in the air, U.K. music retailer HMV posted posted a November 22 release date on its site. (That date would probably move to Tuesday, November 23 in the U.S. — the conventional release date in the States.)

In the meantime, My Chemical Romance have released a Quentin Tarantino-style action clip titled “Art Is the Weapon,” which features a blazing new pop-punk anthem. In the clip, Way and the band cruise around in a desert in a hot rod, pop into a diner to scarf down jars of beans and have a Western-style showdown with a masked gang. Check it out below.

My Chem’s new album has been long in the works. Back in December ’09, singer Gerard Way talked to SPIN about the band’s plans for the record, although the band hit a rough spot in March when they announced that drummer Bob Bryar had left the group.

What do you think of the band’s new video and new sound? Tell us in the comments section.

WATCH: My Chemical Romance, “Art is the Weapon”