Maya takes the stage, replete will all the conflicted but engrossing imagery we've come to expect. 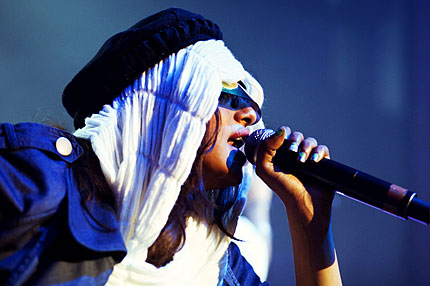 Arular, Kala, // / Y / — Maya Arulpragasm named her albums after her freedom-fighter father, her mother, and herself. It says plenty — the M.I.A. theme is identity, in all its roiling, coming-to-be chaos.

But M.I.A. is also about contradiction, or at the very least, duality. Tuesday night’s tour-opener at Montreal’s sold-out Metropolis brought home that idea. And whether the crowd believed Maya to be real, or a purposefully conflicted character, the packed house was there to throw hands in the air, dance (even onstage), and celebrate all that diversity.

M.I.A.’s show was a brief 65-minutes long but she was a ferocious presence on stage for the entire gig. After an opening spot from her self-described dance-mad protégé Rye Rye and an interminable DJ set, M.I.A. took the stage with attitude to blaze on “World Town,” with its sinus-imploding low end.

Later, she was mixing Third World politics with fashion-runway sensibility, post-modern alt-dance clatter-and-boomboom skittering off the tribal defiance, crotch-grinding her freedom against three immobile backing vocalists in stylized burqas — M.I.A. might be the only pop star who can play with Islamic iconography and get away with it.

Then, just in case enough buttons hadn’t been pushed, M.I.A. also referenced her “Jewish housewife look” (black-and-white stripes, trench-cape, headscarf and shades), preened in front of a video backdrop of battleships and blood-spatters, and unleashed a winning electroid groove on older faves like “Bucky Done Gun” and “Amazon.”

Kala’s “Boyz” cued pandemonium onstage, precisely because our heroine had subverted the usual concert paradigm: Instead of inviting up a bunch of screeching girls, she called on a bunch of guys to hop about onstage while she rapped: “How many no money boys are rowdy? How many start a war?”

M.I.A. also brought aggression when performing songs from her excellent (but challenging) new album // / Y /. “I need to see the mosh pit!” she shouted before launching in the frenetic, speed-metal riff of “Born Free.” Later, she referenced the pope in “Story To Be Told,” and noticeably skipped over the album’s most pop-friendly track “XXXO.”

The crowd may have been bewildered by M.I.A.’s new material, but as she encored with “Paper Planes,” the Metropolis turned into a mini-stadium of riotous, joyous adulation.

Mark Lepage
Tags: M.I.A., We Were There